« Gators one or two wins away from locking down at-large bid after upsetting No.20 Vols | Main | Dan Werner, SHOOT OR PASS; Chandler Parsons, GET'N FANCY »

Should Jeff Demps quit football and focus on track? The answer is no, says one pro track coach

GAINESVILLE -- Jeff Demps is burning up the indoor track for the University of Florida this season. He has the nation's fastest time in the 60-meter dash entering this weekend's Southeastern Conference indoor track championships at the University of Arkansas. The question: Should Demps quit football and focus on track? One pro track coach says no.

Loren Seagrave is a prominent voice in the United States track community. He's a sprints expert, operates Velocity Sports Performance and has coached his fair share of Olympians and Olympic medalists. He's also familiar with football, having served as the Atlanta Falcons speed and conditioning coach in the 1990s. Gator Clause caught up with Seagrave on Thursday to gauge the buzz around Demps among U.S. track's elite coaches and find out an expert's opinion on whether or not Demps would be wise in quitting football and focusing on track. 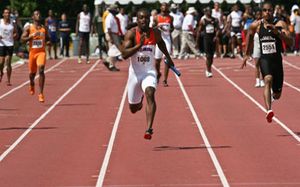 Demps will likely participate in spring football in a limited role this March to focus on outdoor track. The 2010 U.S. Track and Field Outdoor Championships is June 23-27. Demps indicated before the Sugar Bowl that it is his goal to qualify for the meet. The current automatic qualifying time in 100-meter dash for U.S. championships is 10.15 seconds. Demps currently holds the U.S. Junior Outdoor Track and Field record in the 100 meters (10.01 seconds) but that record was set in 2008.

Seagrave is aware of Demps' talents and says the track community is impressed with Demps' raw speed at such a young age. If Demps wanted to turn pro in track today, he could do it. Seagrave says that would be a bad idea.

Seagrave says his opinion is certainly not the consensus. Many track coaches believe year-round training is the best way to fully develop a sprinter, but Seagrave counters that philosophy with an understanding that the quick-burst training that running backs and wideouts receive is conducive to sprinting. The extra muscle mass running backs and receivers need for football can be easily shed once a former football player decides he wants to focus on track, according to Seagrave.

"With the exception of an injury, football preparation is actually really good for a sprinter," Seagrave said. "The only thing about playing football is there is always that chance that you're going to get whacked and then if you're even a little bit damaged you don't always come back as strong as you were before. In football you can have a pretty significant injury and they can put you back together again and you can still play at a high level, whereas track and field that isn't always true."

In the end, it's all about the money. Seagrave said that Demps could make substantially more money than even an Olympic champion by playing professional football for four or five years. If Demps has that opportunity, then he should pursue it. If Demps' football career plateaus because of his size (he's listed at 5-8, 183 pounds), then he can always fall back on track.

Depending on how Demps' career on the track unfolds, he could be faced with a tough decision in 2011. Should he forgo his senior season of football (or possibly redshirt) to prepare for Olympic qualifying? Demps didn't want to look that far into the future in January, but did say it will depend on his track times and if he thinks he has a legitimate opportunity to make the U.S. Olympic team. The 2012 Summer Games are in London.