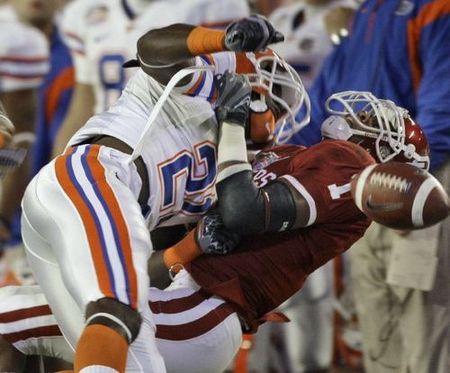 PICTURED: Major Wright welcomes Oklahoma Sooners receiver Jauquin Inglesias to South Florida during the 2009 BCS national championship game. The bone-rattling play will go down as one of the best hits in Florida football history.

GAINESVILLE -- So, picture this: A football player gets drafted by the Chicago Bears and then momentarily loses his mind. He bursts out of his home, runs up and down the street screaming to all of Fort Lauderdale and the world and then breaks down and cries.

That was former Florida Gators safety Major Wright on Friday night. He was drafted in the third round (75th overall) by the Chicago Bears. It was the Bears' first pick of the NFL Draft.

Wright's punishing style will fit in nicely with the Bears, who are in need of some help in the secondary after finishing 27th in the NFL against the pass last season. Wright, a graduate of Fort Lauderdale St. Thomas Aquinas, was one of four Gators drafted on Friday, the second day of the NFL Draft. Seven Gators have been drafted through the first three rounds. Rounds four through seven will be determined on Saturday. UF players still to be drafted are Aaron Hernandez, Riley Cooper, David Nelson, Markihe Anderson, Brandon James and potentially others.

Defensive ends Jermaine Cunningham and Carlos Dunlap and middle linebacker Brandon Spikes were drafted in the second round on Friday. Cunningham was taken 53rd overall by the New England Patriots. Dunlap was drafted 54th overall by the Cincinnati Bengals. Spikes went 62nd overall to the Patriots.