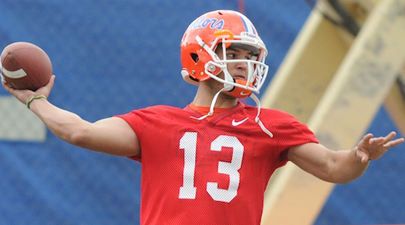 This picture I found on the recruiting website GatorBait.net does Florida Gators freshman quarterback Trey Burton no favors when it comes to throwing mechanics. Looks like he's throwing a grenade or something. Make no mistake, Burton did not bomb this spring. Far from it. It appears Urban Meyer hit a recruiting home run with this kid.

Burton's arm motion has been criticized on fan message boards. You won't find that here. Gator Clause endorses atypical and traditional throwing motions alike. Whatever gets the job done, and Burton certainly got the job done this spring. So much so that Gator Clause is naming the early enrollee the team's most improved player.

The editorial board here at Gator Clause likes Trey Burton and you should, too. Florida's back-up quarterback is a tough kid and an absolute, rock-em-sock-em born leader. He improved more than any player this spring and will start in Saturday's spring game. Keep in mind, he's still supposed to be in high school.

I had some fun with Burton on Wednesday and asked him, "Why do you get jacked up by the defense and Brantley doesn't get hit?"

Trey didn't exactly enjoy the question, but he answered my jack-a-hole inquiry with poise and class. "I wouldn't have it any other way," he said.

Burton still has plenty of work to do, but he already has proven to be an promising freshman. He's coachable (his throws have improved dramatically since the first day of spring) and, most importantly, Burton has already earned the respect of his teammates. Oh, and don't forget, it was Burton who called recruits and helped keep the recruiting class together this offseason when UF coach Urban Meyer had his incident.

Burton could be used in a Wildcat package this fall or he could be held in reserve just in case John Brantley gets hurts. (That's probably the smart move.) Either way, Burton is a valuable member of the team and has already proven himself a legitimate football player.