GAINESVILLE -- So, you know how different blogs always have their individual niches. Like, this blog is dedicated to protecting the poor and fighting illiteracy. Well, the editorial board here at Gator Clause -- in our collective brilliance -- has decided to branch out.

We're now going to add coverage of Joakim Noah to our repertoire. From henceforth, this blog is dedicated to providing its readers with periodic updates of Noah and his exploits. There are two archetypes for athletic leaders at the University of Florida. There is the Tim Tebow archetype and there's the Joakim Noah archetype. They both win championships. They both inspire excellence. They both speak their minds. The difference in Tebow and Noah: One guy is kind of dorky and one guy is undoubtedly cool. 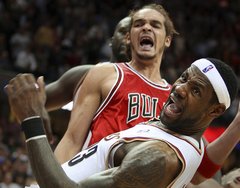 So, we've already established here at ol' Gator Clause that Noah is pretty much one of the coolest athletes in the world. That's a proven fact. And, it's already been established that Lebron James really wishes he was cool and authentic and he pays a lot of people a lot of money to make him appear cool and authentic but he just isn't and never will be.

So, Lebron is envious of Joakim, and that's understandable considering Lebron's insecure personality and Joakim's Jedi powers. It's made for an interesting rivalry. That rivalry will be renewed at 3 p.m. on Saturday in the first round of the Eastern Conference playoffs. The winner of the seven-game series matches up in the second round with the winner of Heat-Celtics series.

Noah has promised to try and shock the world with a first-round win against Cleveland. Noah's Bulls are the Eastern Conference's eighth seed (last) and Cleveland is seeded first.

And since Noah is the foremost authority on cool, he's right, of course.

Noah pretty much single handedly transformed the Bulls' team culture when he arrived in Chicago in 2007. It took some getting used to by the lazy veterans who were with the team at the time, but everyone got the message. Now Noah has the Bulls in the playoffs for the second year in a row. Noah has Lebron's attention, too.

"We're ready for the challenge," James said. "I think Noah's a really good player. He's a really good talent. But, you know, he asked for us a couple weeks ago and he got us. So we're ready. It's a different monster they're going to be playing against on Saturday."