Tebow impresses media during first practice with the Broncos, completes 21 of 22 passes 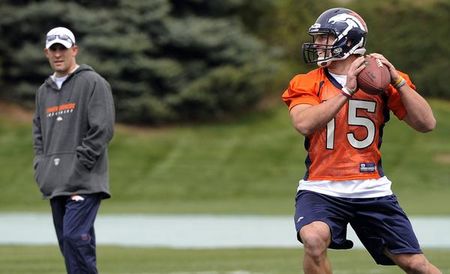 (Photograph by Craig F. Walker of the Denver Post)

GAINESVILLE -- Have you ordered your officially licensed Tim Tebow Denver Broncos jersey? If you haven't, then you're apparently in the minority. CLICK ME!

Tebow donned his No.15 Denver Broncos jersey for the first time in practice on Friday at the Broncos' headquarters in Englewood, Colo. Members of the media were allowed to watch a portion of the Broncos' first rookie minicamp. Tebow reportedly completed 21 of 22 passes. The one incompletion was a drop. According to a report by the Associated Press, Tebow's throws were "tight and compact."