GAINESVILLE -- Stuff Tim Tebow said on Thursday night ... And, oh, by the way, bet the good folks at Nike got a real kick on Thursday night out of seeing the first images of Tebow as a drafted player wearing ... a Reebok hat! Love it. 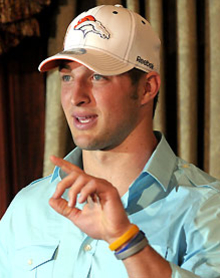 Did he know the Broncos were going to draft him?

"It all started at the combine. I had an opportunity to do an interview with their staff and I left thinking ‘Gosh I love those guys, I love Coach McDaniels. He's so passionate, he loves football.'

[We interrupt this quote with an important message: Tim Tebow loves Reebok like Josh McDaniels loves football. Just look at the hat! Go buy a pair of Tim Tebow Reeboks and donate your Nikes! Now, back to the quote ... ]

After that they didn't come to the Pro day and I didn't hear from them and I thought, ‘Man, are they not interested?' But then at the end they called me up and so I came up and I did a work out for them and I thought that went really good and we thought they liked me and were very straightforward the whole time and said that they were interested in me. So we prepared as thought I was their draft pick. So we had the hats ready and when Coach McDaniels called we pulled them out and we're wearing our pride right now."

How did he deal with the criticism?

"A lot of people said it was going to be a hard process or a long process and that it was going to be very frustrating for me but I loved it and I enjoyed the working process. All the critics and negativity only pushed me that much more and made me work that much harder and made me better. I think that was a positive thing for me, to be honest with you. I believed in myself and the people that were around me and supporting me. I thank my quarterback coaches for the work that they put in and trying to constantly get better. Not only get better but show that I was coachable, to be humble and learn to do what someone says and I think that is something that I tried to show and I think I showed that to Coach McDaniels and the staff there."

How long will it take for him to be a starter?

"I have no idea. That's not even something that I'm thinking about. I'm thinking about just going in there and learning the offense, competing, working hard and just being the first one in and the last one to leave. And showing them that I love this, I love what I do and thank you so much for taking me and I'm not going to let you down."

What number will he wear?

How much does he love Denver Coach Josh McDaniels?

"I definitely want to repay Coach McDaniels for the faith he showed in me. I want to be a great quarterback, I want to pursue that. I've wanted to be a quarterback in the NFL for a great many years. That's my goal and has been my goal since I was 6 years old. I'm going to do whatever it takes to get there. I'm thankful to Coach McDaniels for having the strength and the voice in me, to choose me and to believe in me. I'm just thankful for that and obviously I do, for the next few years, repay him for what he did for me and believing in me. Just like it was when I was at Florida, my biggest thrill was doing things for Coach Meyer, winning championships and being able to help him. That's going to be my greatest joy in Denver is going to be to repay Coach McDaniels for believing in me. That's something that's always been very important to me, is my relationship with coaches. Our connection means more to me than anything else."

How will he balance his off-the-field commitments and football?

"I want to do a lot because I honestly feel that that is more important than playing football. Being able to make a difference and put smiles on kids' faces. I'm excited about the opportunity but I probably won't do that much right now because this whole summer I'm going to be in the film room and in the meeting room, learning, working and grinding. I'll probably start that after my rookie year. I do have my foundation up and running, the good thing about that is that my brother and other members of my family can really help out and run that while I get to working on football."