NEW ORLEANS -- Surely you've wondered where Goody has been hiding. Well, I've been busy. Gator Clause is taking a break until next week and will return next Tuesday with coverage from the Southeastern Conference spring meetings in Destin.

The editorial board has been all over the last three weeks: Panama City; Odessa, Texas; and now southern Louisiana. We're covering the affects of the oil slick in the Gulf of Mexico. Here are some links of our efforts, stories and videos. We'll be in Louisiana through the weekend.

SANDBAG BY SANDBAG, BARRIER IS BUILT

U.S. FEELING PRESSURE TO DO MORE ON GULF OIL SPILL

Posted by jgoodman at 2:35 AM | Permalink | Comments

GAINESVILLE -- Billy Donovan is back on top of the recruiting game. Florida's coach is close to finalizing a six-player recruiting haul this offseason, which positions UF a favorite to win the Southeastern Conference next season and beyond and potentially make a substantial run in the NCAA Tournament this winter.

The final piece of Donovan's recruiting class slid into place last week when 11th-grader Scottie Wilbekin of The Rock School in Gainesville announced he would graduate high school a year earlier to enroll at UF this summer. A point guard, Wilbekin adds depth to the Gators' backcourt, which returns starters Kenny Boynton Jr. and Erving Walker but little else.

The addition of Wilbekin and the return of Alex Tyus currently leaves Donovan two scholarships over the NCAA's maximum of 13 for next season, but it is believed that freshman Nimrod Tishman of Israel will not return to UF after this summer and forward Adam Allen will be granted a medical hardship, freeing up another scholarship.

Donovan now enters the 2010-2011 season with five returning starters and plenty of talent coming off the bench, including a McDonald's All-American (Patric Young) and a 6-11 veteran center (Kenny Kadji). Donovan will have multiple line-up options with which to tinker this preseason. Two to consider...

Posted by jgoodman at 4:40 PM in Florida Gators | Permalink | Comments

GAINESVILLE -- Florida coach Billy Donovan has a history of taking chances on players with questionable backgrounds. The latest example seems to be Cody Larson, a 6-9, 225-pound power forward from Sioux Falls, S.D.

We'll have a story up on MiamiHerald.com shortly about Larson's travails. To make a long story short, the guy allegedly knows a thing or two about people who might at one point have illegally taken a few painkillers. Larson and a buddy were suspended from their high school basketball team in February after a run-in with the cops, allegedly over some Hydrocodone (Vicodin).

Don't want to stereotype here (well, yeah I do), but this all sounds so very South Dakota, where there is absolutely nothing to do except apparently eat a bunch of pills to pass the time. Larson, for his part, has not been charged with taking drugs. He has only been charged for living in a place where he knew illegal substances were being stored and used, a misdemeanor. At best, that doesn't sound like a great environment for young Mr. Larson. At worst, Florida basketball is about to inherit some potential drama.

Coach Billy Donovan was well aware of Larson's legal troubles during the recruitment process, meaning Donovan knows the risk he's taking on Larson. Larson's court date is set for June 22 but he'll probably work a plea deal before then. At that point, it will be up to Donovan, UF's support staff and the basketball team's leaders (Chandler Parsons and Kenny Boynton Jr.?) to keep Larson out of trouble. Hopefully this relationship will work out for both parties.

Posted by jgoodman at 3:09 PM in Florida Gators | Permalink | Comments

For the second year in a row, Alex Tyus flirts with leaving Gators but returns

GAINESVILLE -- Give Gators forward Alex Tyus credit for one thing, he allows such plentiful Gator hacks as these to write about something during the doldrums of summer.

So, for the second year in a row, Tyus (Billy Donovan's 6-8 identity crisis) thought about leaving Florida, told everyone he was leaving Florida, waited for the reaction and then returned to Florida. I'm sure psychologists have a term for this type of peculiar pattern, but I'm too lazy right now to look it up.

You might recall that last year around this time, Tyus told everyone via his Facebook page, or Myspace page, or whatever attention-seeking page, that he was transferring away from Florida because he was unhappy with his role on the team. Tyus thinks he's a small forward; Donovan uses him as a power forward. In the end, Donovan convinced Tyus to return to UF. This time around, it was much of the same. Tyus told everyone he was turning pro, everyone told him he was crazy and now Tyus is coming back for his senior season.

Tyus' return to UF plus the four incoming freshmen gives UF 13 players on scholarship (14 if you count Rutgers transfer Mike Rosario, who will not be eligible until 2011), or the maximum allowed by the NCAA. Donovan had hoped to add another point guard to the 2010 recruiting class but something will have to change for that now to happen. Stay tuned.

Posted by jgoodman at 10:36 AM in Florida Gators | Permalink | Comments

GAINESVILLE -- So, UF assistant coach Steve Addazio CAN'T answer one simple question about recruiting strategies because he says it violates rules set out by the NCAA. This happened a few days ago when I wanted one question answered during a conference call. However, UF assistant Stan Drayton CAN do a two-part series with Rivals.com.

Is UF breaking the rules here, or does UF just not know the rules? Actually neither is true. Coaches know the rules so well they know ways to skirt the rules without breaking them. Giving away recruiting strategies to the Miami Herald would just be foolish. Coaches give information to recruiting websites regularly, though. Recruiting websites are one of the ways coaches can bypass the NCAA's rules to communicate and recruit kids surreptitiously during this evaluation period.

Drayton, who's back at UF after brief stints at Tennessee and Syracuse, recently told Rivals.com that Florida plans to remain a player on the national recruiting scene. Once just a regional recruiting power, UF is now pulling in major recruits from the Northeast, the Midwest, Texas and California. Incoming freshman Ronald Powell of Southern California is nation's best high school player, according to Rivals.

Drayton per Rivals: "We understand that some of the best talent in the country is right here in our backyard. I think we are able to compliment what we get instate with what we are able to get out-of-state, but at the end of the day when you look at our roster, you're going to continue to see a whole bunch of guys from the state of Florida playing for the Gators.

"The way we balance it out is that our goal is to bring in the best student-athlete in the country to the University of Florida and we believe that the University of Florida deserves that. It's not that we are turning our backs on anyone. For us, it's just a matter of finding out who are the best student-athletes in the country and do we have a chance of getting them?

"We're always going to look to Florida first to fill our needs and then expand outward from there."

Posted by jgoodman at 8:10 AM in Florida Gators | Permalink | Comments

PANAMA CITY BEACH -- So, I'm in Panama City Beach helping with the Herald's coverage of the Gulf oil-spill disaster. Unsettling stuff. No oil in P.C., I'm happy to report. Saturday was a long day of work and I decided to eat at a local landmark, Capt. Anderson's.

Great fish at Capt. Anderson's. I recommend the stuffed flounder. Get it while you can, I was thinking. ANYWAY, so there I am eating my flounder and its stuffing when I glance up and notice something interesting. That's right! My first sighting of a Tim Tebow Denver Broncos jersey in Florida. Naturally, I interrupted the nice people to take a picture for the blog.

Pictured are Tommy Sims and Ruby Bentley of Panama City. Thanks, guys. 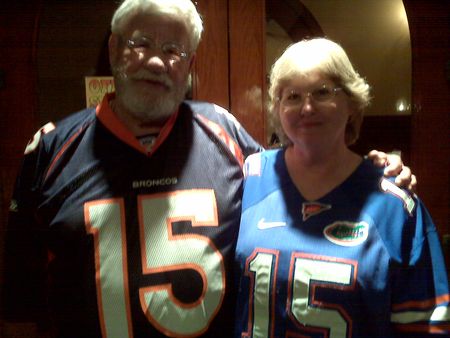 Posted by jgoodman at 12:36 AM in Florida Gators | Permalink | Comments