Emmitt Smith's emotional speech highlights Hall of Fame inductions but did he purposely snub the Gators? Doubt it. 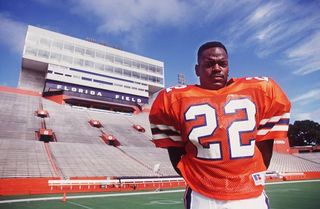 One of five members of UF's exclusive Ring of Honor, Smith starred at Florida for three years before being drafted by the Dallas Cowboys. He enters the Pro Football Hall of Fame as the NFL's top runner with 18,355 yards. He is also the NFL's leader in rushing touchdowns (164), seasons with 1,000 or more yards rushing (11) and games with 100 or more yards rushing (78).

Cowboys owner Jerry Jones introduced Smith and Smith's acceptance speech was emotional and touching. His tribute to Cowboys' fullback Daryl Johnson was especially moving. For some strange reason, Smith didn't mention the University of Florida. Maybe he just wanted to focus on the professional aspect of his football career. After all, it is the Pro Football Hall of Fame. I've spoken briefly with Smith in the past about his time in Gainesville and he didn't seem bitter.

For what it's worth, every year there are several prominent photographs of Smith in the Gators' football media guide, which doubles as a recruiting tool. There is a photo of Smith receiving his degree in 1996 on page 18 of this year's media guide. The caption reads: "Emmitt Smith, the NFL's career rushing leader, came back to Florida in the spring of 1996 to earn his degree in public recreation after completing courses during the NFL offseason." On page 27, there's an even larger photo of Smith (shaking hands with Meyer during a game) in a section of the media guide entitled "Gators in the NFL."

Finally, one criterion to merit consideration for UF's Ring of Honor seems to discredit a conspiracy that Emmitt Smith holds contempt for his alma mater. It reads: "For a player or coach to merit consideration for induction into the Gator Football Ring of Honor, at least one of the following criteria must be met. In addition, the individual must have been departed from UF for at least five seasons, and he must be in good standing with the institution."