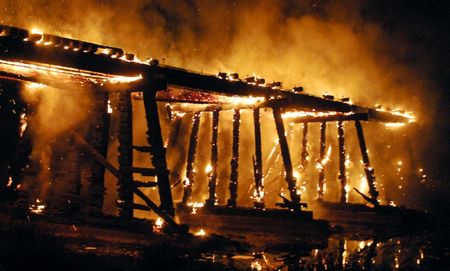 PICTURED: This is how you feel when Steve Addazio is named offensive coordinator instead of you.

GAINESVILLE -- So, it should be pretty obvious to everyone that former UF assistant coach Billy Gonzales wasn't a happy camper in his final season in Gainesville, but this story a source relayed to me on Thursday adds a whole new level to Gonzales' perceived bitterness towards Urban Meyer and the Gators' offense under the control of current offensive coordinator Steve Addazio.

Gonzales is now an assistant coach at LSU, which plays the Gators at Ben Hill Griffin Stadium on Saturday. He was one of Meyer's loyal foot soldiers for a long time, but don't expect any friendly pregame handshakes between old friends. When Gonzales left Florida for LSU, he apparently burned a bridge along the way. The story circulating through Florida's football program is that Gonzales informed Meyer he was leaving for a rival program with a sticky note. That's right, one of those annoying little pieces of yellow paper.

No face-to-face talk. No one-last-beer toast at The Grog House. None of that. According to the source, Gonzales left his keys and cell phone on a desk along with this message: "I'm going to LSU." 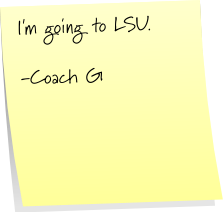 Angered beyond comprehension with the thought of Steve Addazio, Gonzales made a lateral move to one of UF's annual rivals.

Understand the history between Gonzales and Meyer before allowing that sink in. Meyer was Gonzales' position coach (receivers) at Colorado State from 1990-1993. In 2001, when Meyer landed his first head coaching job at Bowling Green, he hired Gonzales away from Kent State to coach wide receivers and hired an unknown grad assistant at Notre Dame to coach quarterbacks, Dan Mullen.

Together, Meyer, Mullen and Gonzales devised their own little version of the spread offense. They weren't the only ones, obviously. Mullen didn't become Meyer's offensive coordinator until they arrived in Gainesville. Still, Gonzales and Mullen were right there in every meeting and both men were important players. Mullen was charged with molding quarterbacks to the offense; Gonzales' task was teaching receivers the fundamentals of perimeter blocking above all else. Gonzales and Mullen were there from the ground up, and by the time Gonzales and Mullen coached at Utah with Meyer and packed their bags for Gainesville, they knew the offense better than anyone.

Gonzales is a few months older than Mullen, but Mullen was named Florida's offensive coordinator in 2005. "That's cool," Gonzales probably thought. "Dan coaches the quarterbacks, after all, and the guy is really smart. Good for him. I'll get my shot."

Gonzales wanted to be UF's new offensive coordinator when Dan Mullen left for Mississippi State. He wanted the job badly. He felt like he deserved it. Heck, the man had good reason to feel this way. He had been with Meyer and Mullen since Bowling Green and had done a fine job as UF's receivers coach. Gonzales coached Percy Harvin, Louis Murphy, Bubba Caldwell and several other UF receivers who are now playing in the NFL.

That brings us to a relationship gone bad. Something happened along the way that infuriated Gonzales to the point that he would potentially sacrifice his relationship with Meyer out of spite.

Steve Addazio happened. Some could argue that UF's offense has been a shell of its former self ever since. Did Meyer promote the wrong guy? This much we know for a certainty: LSU Week has an entirely new meaning this season for the Gators.