« #Gators drop from AP top-25 after loss to MSU | Main | No matter how Urban Meyer meant it, Auburn's Cam Newton is hard to watch » 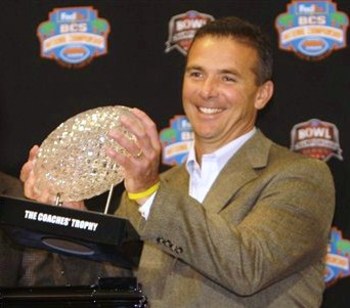 No interview access to the Florida football team til Wednesday, and once again, my saying of, "Don't give media members anything to cover and they'll come up with something" rings true.

There has been plenty of fallout from the Gators' loss to Mississippi State, with most of the anger directed at offensive coordinator Steve Addazio, whose job is now being offered up on Craigslist. But as I said in my last post on here, head coach Urban Meyer deserves some blame for this season going the way it has.

Evidently, someone agrees, though perhaps too much. The website FireCoachMeyer.com picked up lots of attention Tuesday, being featured on ESPN's Around the Horn and Pardon The Interruption and sparking debate about whether Meyer is taking tons of heat from UF fans. In my opinion, this discussion is stupid for two reasons, the obvious one being that Meyer has won two national titles in five-plus seasons and isn't going to be fired.

But also, take a look at that site. It was created in 2005 under the belief that Meyer's spread offense wouldn't work in the SEC (by the kind of person who probably referred to it as a Mickey Mouse offense). That turned out to be very, very wrong, and the site mostly went quiet until this season. It also looks like it was designed by a 7th grader, which may be an insult to 7th graders.

This isn't some coordinated effort by Florida fans to oust the most successful coach they've ever had, it's just some dummy who made a website. You could start one right now and get on ESPN within 24 hours (www.fireMikeandbringbackJoe.com is available).

It would take at least three solid seasons of near-.500 play for me to start believing Meyer needs to go. In my mind, it's more likely he'd retire than be fired for mediocrity. Addazio, meanwhile, is probably a goner if this year keeps going terribly. In fact, I'd wager that a loss to Georgia where UF scores 10 points or less would spell the end of his tenure.

What would it take for you to want Meyer fired? Let's keep it to on-field results. Here's the most painful scenario I could see for Gators fans this year, outside of losing out: Florida loses to South Carolina but still manages to sneak into the SEC Championship, where it falls to Auburn before losing to Illinois in a bowl game. That way, the Gators will have lost to Billy Gonzales, Dan Mullen, Steve Spurrier, Cam Newton and Ron Zook in the same season. Can you top that?