« #Gators fans don't really want Urban Meyer fired, do they? | Main | Chris Rainey will be right where he belongs Saturday: on the field for the Gators »

No matter how Urban Meyer meant it, Auburn's Cam Newton is hard to watch 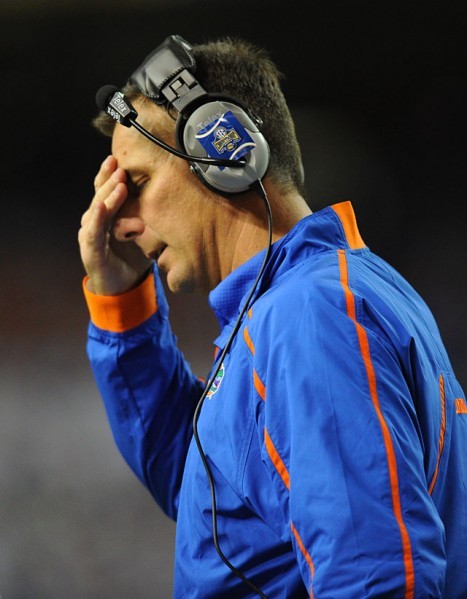 He probably didn't mean it that way, but after mostly deflecting questions about Florida-turned-Auburn quarterback Cam Newton all season, Urban Meyer accidentally gave the perfect answer.

Here's the exact transcript from Monday's press conference, where Meyer's quote led to lots of confusion:

Reporter: Do you allow yourself to watch Cam Newton on Saturday? Did you watch him?
Meyer: It’s really hard, I’ll tell you that. I don’t watch much of it.
Reporter: It’s really hard to watch it?
Meyer: Yea.
Reporter: Because…
Meyer: I just think he’s a very good player, and I’m trying to watch more of the teams we play, so I spend my time watching the other ones we’re going to play.
Reporter: So like every Florida fan in the country, you think, ‘What if he was here?’ You let yourself...
Meyer: No, no, no, no. I didn’t say that.
Reporter: Does that ever cross your mind?
Meyer: No.
Reporter: Liar. (Laughter ensues)

A UF spokesman said Meyer told him afterward that he had probably been misunderstood as saying he can't bear to watch Newton because he's been so good since transferring away from UF. To me, it's pretty clear Meyer meant that he doesn't have time to watch much college football outside of the teams he's preparing for. But it also doesn't matter, because anyone with any sense knows that Meyer doesn't like the fact that while his offense is struggling, a player he once coached could win the Heisman Trophy--at Auburn.

(UPDATE: After re-reading that quote a few times, I've had a change of heart. The "I'll tell you that" part doesn't make sense other than as part of him saying it's hard to watch Newton because he's good. Looks to me like Meyer let some honesty slip out and then tried to backpedal.)

Newton balled out once again this weekend, rushing for 217 yards and two scores while completing 10 of 16 passes for 86 yards. He's already set an SEC record for rushing yards in a season by a QB, and he has at least five games left. His second TD run against the Tigers looked like this:

Naturally, Newton's success this year has been a thorn in the sides of Gators fans, with plenty of jokes about how a stolen laptop ruined Florida's offense and complaints that Meyer picked the wrong time to be a disciplinarian when he booted Newton from the program.

A good story, only that's not what happened. Yes, Newton bought a stolen laptop and tossed it out the window when police arrived, but Meyer didn't kick him off the team. Newton left because Tim Tebow decided to come back for his senior year and John Brantley was waiting in the wings.

That's where UF's staff really messed up--they just missed on the kind of talent they had in their hands. The decision was effectively made when Brantley and Newton were freshmen and Brantley got redshirted, meaning he'd be around longer after Tebow's departure. There was also some talk of putting Newton at tight end, though we'll never really know how serious it was.

Newton was never especially impressive to me while he was in Gainesville (my lasting image of him in orange and blue is him dropping snaps. Imagine how much fun that would have been this year!) but this fact remains: Newton is the best player in college football so far this season, and Florida let him get away.

Meyer said a few weeks ago that he had no regrets about the way Newton's disciplinary situation was handled, but he has to wish he had that kind of talent on his team now. That's not something we have to hear from his mouth to know that it's true. It's just common sense, kind of like Brantley doesn't have to say this isn't how he envisioned the season going for us to know this isn't ideal.

For more on the Newton story, check out these two links:

And, make me feel cool by following me on Twitter.