« Can we put a sock in all this Florida-Georgia choke-sign talk? (UPDATED) | Main | Newton wasn't necessarily facing expulsion from UF over cheating allegations »

Can the Gators silence their critics this weekend?

I'll get to all the exciting UF-Vanderbilt talk you've been waiting for in a second, but first off, we've got a fun photo from UF student Erik Knudsen, who spotted University Athletic Association workers painting over this sign on the 34th Street wall in Gainesville during the bye week: 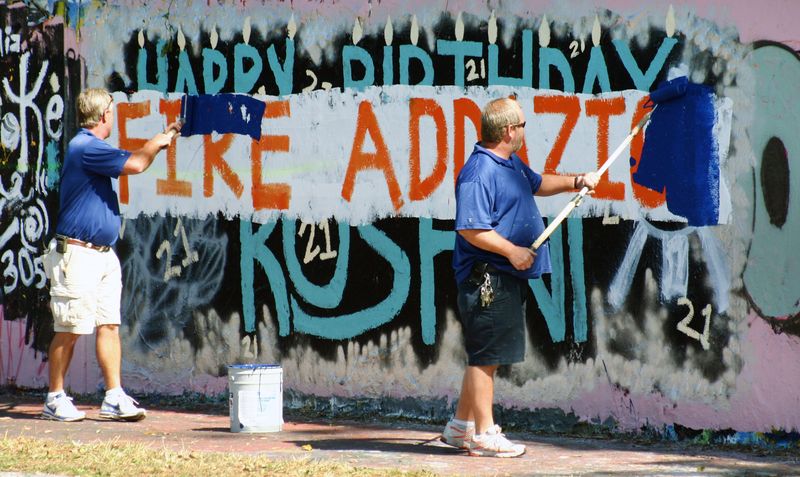 Here's the story: After talking to the UAA maintenance department, a UF spokesman said they took it upon themselves to clean up this anti-Steve Addazio message and that no order came from the athletic department or football team to do so.

Yes, the wall on 34th is traditionally an outlet for student expression, and seeing this is kind of lame, but UF does have the right to protect its employees. Plus, the point of that wall is that you can paint what you want when you want to, so this isn't out of line. Just funny.

Anyway, the Gators threw a little blue paint on the "Fire Addazio" movement with their play against Georgia last week, and they'll be looking to do the same this weekend (smooth transition, huh?).

Good ol' Vanderbilt: the cure for a struggling football team. Even though Florida can still reach the SEC title game, the Gators have a lot of improving to do before they're ready for Alabama, Auburn or even South Carolina next week (that is, if Cam Newton's still playing for the Tigers).

The win over Georgia helped confidence-wise, but a three-point victory over a mediocre team does not right the ship. Saturday's meeting with Vanderbilt is the kind of game the Gators have struggled with in the past, with an 11:20 a.m. kickoff (central time), temperatures expected below 50 degrees and a small crowd.

Essentially, this is a warm-up game before the Gamecocks, but anything short of pummeling the Commodores, who've lost their last three SEC games by a combined score of 113-21, will be viewed as a failure. Vandy's offense shouldn't have much bite, especially now that running back/kick returner Warren Norman is out for the season with a wrist injury.

This will fall on Florida's offense, and I'd expect the attack to be fun to watch this week for a few reasons:

2. The Gators (allegedly) have lots of options in the run game. Urban Meyer said Emmanuel Moody (ankle) and Mike Gillislee (hamstring) are 100 percent, while Jeff Demps (sprained foot) should play as well. Add in Chris Rainey's dual role at RB and slot receiver, Trey Burton's wildcatting and the increased role Jordan Reed is supposed to have, and Florida should be able to throw a whole lot of looks at the Commodores. Reed (a former quarterback) is also supposed to throw the ball some. We'll see.

3. The no-huddle offense. It looked better against Georgia than I'd ever seen the Gators run it, and if they can clean up some of the penalties, that will be a very effective tool moving forward. Another plus is that most of the key offensive pieces (Demps, Rainey, Burton, Reed, Andre Debose if he's healthy) are versatile enough to play at several positions, meaning Florida doesn't have to interrupt the hurry-up with a bunch of subsititutions.

What do you want to see from the Gators this weekend? Will you be satisfied with anything less than total destruction? Wanna ramble about Randy Shannon or something instead? Holler in the comments.

And join the movement.