« Can the Gators silence their critics this weekend? | Main | Contest: Come up with a nickname for the Gators' 3-QB offense » 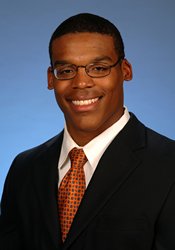 Cam Newton has blown by plenty of defenders this season at Auburn, but now he has to outrun a bunch of off-field allegations.

Less than a week after reports surfaced that a man solicited money from Mississippi State to ensure Newton would transfer there, FOXSports.com dropped a report that Newton was popped three times for academic cheating while at Florida.

UF had no comment on the situation, citing federal laws protecting student privacy, and Urban Meyer had this to say about rumors that he was the anonymous source in the FOX story:

“Our entire focus right now is on preparing for our biggest game of the year against South Carolina,” Meyer said in a statement. “For anyone to think that I or anyone on our staff may have leaked information about private student records to the media doesn't know us very well. It's a ridiculous claim and simply not true.”

But really, who cares if it was Meyer? I only care whether these allegations are true. Even if Meyer was the source and did it because he's angry Newton left, that's fine as long as it's true.

Assuming it is, that means Newton got caught cheating as a freshman and then, after his run-in (and throw-out) with police in November 2008 over a stolen laptop, he got in trouble two more times because of a paper. First, he allegedly put his name on another student's paper and turned it in, and after he was given a second chance, he turned in a paper he bought on the Internet.

I'm impressed by the idea of just putting your name on someone else's paper. I've turned in hundreds of papers in my academic career and never fallen prey to that, and I can't even fathom how that's done. Maybe one day Cam will explain.

Anyway, after these two incidents, Newton was supposedly due to appear before a student conduct committee but left rather than face consequences. Still, it's no sure thing he would have been expelled. UF spokeswoman Janine Sikes said UF expels between one and two students a year and suspends about 10, but both numbers are skewed by students leaving before the hammer drops.

“There are no automatic consequences at the University of Florida,” Sikes said. “It depends on the totality of the issues. Each one is a case-by-case basis, and they really mean that. There is no single ‘If you do this, this is what happens.’”

I don't really care whether Newton cheated at Florida, but it does put a big dent in the redemption tour he's currently on, especially in conjunction with the money allegations. It also vindicates Meyer a bit in my mind. I felt he was to blame for Newton leaving because he failed to recognize the talent he had in front of him, but these allegations make it look more like Newton did it to himself.

And it'll be very interesting to see what impact this has on the Heisman Trophy race. Newton now faces the issue of voters passing him over out of fear that his Heisman could be vacated in the future, which is not how the award should be determined.

Oh, and the FBI is in on the act now.

Finally, here's a look at Mark Schlabach's welcome at Auburn last weekend. Schlabach has done a lot of reporting on the story for ESPN.com.

What do you think of all this? Do you believe Meyer? Do you think he'd drop a distraction like this in the biggest week of the season? And how much does this tarnish Newton in your mind?