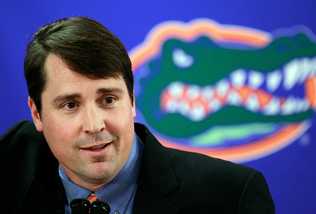 I'm about to hop on a plane for a week snowboarding in Utah, so sorry if this isn't my usual, well-thought-out, impeccably written post that provokes all the thoughtful discourse in the comments section that we know and love.

Anyway, Will Muschamp had his first press conference as Florida's coach Tuesday. Here are the highlights:

Muschamp said he doesn't plan to hire assistants until after the bowl game, and most likely in response to all those Kirby Smart rumors from Monday, he offered this:

"There has been no one offered a job in the country right now by the University of Florida to work on our football staff, regardless of what you read. There's one source in this football program, and that's me, and there's one guy hiring coaches and that's me. So nobody has been offered a job, and let me make sure everybody understands that before we walk out of here tonight."

Now, as to your biggest fear, it probably won't be Steve Addazio who gets the OC gig. When you're back from your naked victory lap around the block (and done thawing yourself), meet me at the next paragraph.

Muschamp said he plans to run a "pro-style attack" on offense and defense, and he prefers an OC with experience both in college and the NFL. It's too early to speculate on what will happen, but no matter whom he hires, the new coach will have to alter his scheme to fit the players who are there.

The biggest question remains: Who will be Muschamp's first quarterback? Rumors have been flying that John Brantley wants to transfer after the season, and he did little to dispel that Tuesday. He said he'll talk to his family and make a decision, and it sounded like he was waiting to see who gets hired as the coordinator.

Now, losing Brantley isn't a huge deal based on his play this season, but who knows if he'd be better in a different system? And a lot will also depend on Jeff Driskel, who's due to enroll at UF in the spring.

3. Muschamp is waaaaay different from Urban Meyer in terms of personality

I can't express how bizarre it was to see someone other than Meyer at the lectern today, and Muschamp really owned it. He's a very polished public speaker, and he went for 40 minutes including a 20-minute opening statement.

That long-winded debut was a big departure from Meyer's style, and he has the southern accent and demeanor to match an SEC coach. He cracked me up when he told a story about his mom wanting "to get her picture made" with Cris Collinsworth back in the day. Good ol' southern boy.

With that said, Jeremy Foley talked about the similarities he sees between Muschamp, Meyer, Billy Donovan and Kevin O'Sullivan. Foley saw each of those guys as "perfict fits" at Florida, and that's why he was so quick to hire Muschamp.

4. Muschamp wants Meyer around the program

Before he accepted the job, Muschamp said he felt like he needed to talk to Meyer. He did, and since meeting him, he wants Urban to stick around once the bowl game is done.

"The more I’ve talked to him, the more I like him," Muschamp said. "I can tell you this right now, as long as Will Muschamp is the head coach at the University of Florida, Urban Meyer is going to be involved in this program.

“He’ll be a great sounding board for me, and he needs to be involved in this program for our players because he’s the one who recruited them all.”

5. This transition won't be easy for the Gators

A few players were brought in after the press conference, and it's clear they still aren't quite over the shock of losing Meyer. He's still their coach til the Outback Bowl (Muschamp will be observing), but the thought of life after hasn't really sunk in yet.

“I had to look at the screen a couple of times, like, ‘Am I seeing things?’” defensive tackle Jaye Howard said of observing the press conference.

“I kind of had a gut feeling this whole year that it was possible (for Meyer to retire)” Howard added. “He wasn’t the same coach. He used to be yelling at everybody and all that. I took it hard because I love coach Meyer to death, but I know he had to make the best decision for his family.”

Muschamp had his first meeting with the team today, and Frankie Hammond made it sound like it was a little awkward at first, as you'd expect.

“A lot of us were pretty standoffish, but he got us going and let us know that he was the head coach nothing was pretty much going to change,” Hammond said.

You probably heard about this by now, but Muschamp and FSU coach Jimbo Fisher co-own a beach house together from their days coaching at LSU: “We haven’t negotiated what will happen with that yet.”

And when Muschamp was trying to find a place to play college ball (he was a promising HS safety before a leg injury), he arranged a meeting with Steve Spurrier to discuss a walk-on spot at Florida. Spurrier was a no-show: “He was 2-under at the turn,” Muschamp joked.

So what'd you think of Muschamp's debut? Did you catch a glimpse of me in my fly purple shirt on TV? Feel like testing my vigilance as a comment-deleter? I'M WATCHING YOU.