« Gators had the shots, just didn't make them | Main | W2W4 in the Orange and Blue Debut »

Still plenty of mysteries, but here are my guarantees about the UF offense 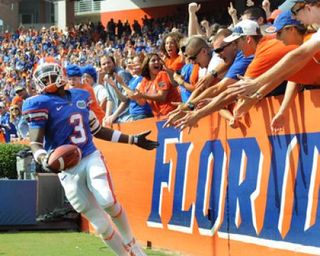 "Everything is different, but it's not that different. It's pretty much just like the spread, except it's not at all, and the terminology is new. Everyone has gotten a lot better, but they were all great last year so there wasn't that much room for improvement."

That, ladies and gentlemen, pretty much sums up every interview with Florida football players this spring. So, with practices closed and only this stuff to go on, what have we learned about the Gators? Very, very little.

Sure, post-practice chatter about things like Quinton Dunbar emerging as a playmaker and John Brantley looking like a perfect fit for a pro-style offense are positive, but it's all vague and could be completely false for all anyone knows.

But, after a few go-rounds dealing with the myths and occasional straight-up lies that come out of practices (like Joe Haden running the Wildcat a couple years back), I've got three things I think you can take to the bank when it comes to the 2011 Gators.

-First, I fully expect Chris Rainey to thrive. He's back at running back full-time after that silly little wide receiver experiment, and Will Muschamp praised Rainey's performance out of the I-formation so far. On Thursday, Rainey spoke to the media for the first time since his arrest in September for aggravated stalking, and he already seems like he learned how to keep his mouth shut. He had a knack for dropping controversial quotes in the past, and that loose tongue eventually landed him in trouble last season, albeit via text.

He should be a focal point of the offense, and despite his small frame, he's always been an excellent runner between the tackles because of his quickness. And now that he's taking handoffs deeper in the backfield, he says he has more of a chance to use his field vision.

“When I get the ball, I can just read the whole field and do whatever I want," Rainey said. "It's more freedom and a lot of fun. I tell them out there that it feels like high school again.”

-Second, the tight end position is about to gain a lot of importance. Jordan Reed became a playmaker last season more by virtue of his quarterback play, and even Aaron Hernandez was a hybrid player rather than a true tight end. Now, Reed is playing the traditional tight end role and says he isn't taking any reps at quarterback. He even said today he's not being used as a short-yardage option, which he previously said he'd be doing.

Instead, Reed said he's focused on improving his blocking, and with more two-receiver sets expected this year, his role in the passing game should increase. And frankly, he's one of the few real mismatches on this offense, so he has to get the ball.

-Third, there's no magic new Brantley in town. I expect him to be better than last season simply because he can't be worse, but not because he's touching the center's butt when he takes the snap rather than standing in the shotgun. At the end of the day, it will come down to Brantley finding open receivers and throwing footballs in their immediate vicinity, tasks he struggled mightily with last year.

The consensus between players and Muschamp is that Brantley looks really comfortable and awesome in the pro-style offense. For two years before last season, the consensus between players and Urban Meyer was that Brantley was extremely polished and could run the spread with ruthless efficiency. The latter certainly didn't pan out, and I'm not sold on the former until I see it.

It's the same Brantley in a new package, and the package doesn't change what he has to do to succeed. Take it from receiver Frankie Hammond: “He looks good, but from the spread to the I-formation, it really isn’t a difference in my opinion. He still has to make reads, still has to throw the ball around, now there are just more tight ends involved and a two-receiver set, which you didn’t see much in the spread.”

I'm not saying Brantley will be miserable, but going under center doesn't flip a switch. Yes, being more comfortable should help, but he also has an offensive line stacked with rookies, so that comfort may only last two seconds per play.

-Finally, so that I don't leave you on a depressing note, here are some tidbits.

Rainey on Charlie Weis' excitement working with Florida's pool of talent: “The first thing he said when he got here was that this is the most athletes he’s ever been around, so we felt good about that.”

Rainey on what to expect from the offense: "Fans are going to be happy again."

And, as I mentioned briefly up top, Dunbar is getting a lot of praise at receiver. I'm usually very hesitant to make too much of stuff like this when it comes out of closed practices, but everyone seems to love him. Hammond singled him out as the best young performer at the position and labeled him a great deep threat, and Muschamp has also talked him up a little bit. Add the fact that Carl Johnson said last season he didn't understand why Dunbar didn't get a chance during games, and the hype around the Booker T. Washington product may actually be legit.

Agree/disagree with my guarantees? Have any of your own? How do you feel about Brantley? Does a new offensive style wipe away all the lowlights of 2010 for you?