« W2W4 in the Orange and Blue Debut | Main | Jenkins in trouble again, think he'll bolt for the NFL supplemental draft? »

This wasn't the debut the Gators hoped for 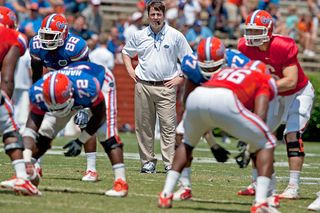 Some things are better left unseen, like the 2011 Orange and Blue Debut.

The long and painful of it: Brantley's Blue team Blew, and Orange wasn't much better. Brantley went 4 of 14 for 45 yards, missing his first six passes and leading his team to just 3 points. The squads combined for 6 points in the first half, with 3 of those coming on a fifth-down field goal. Both touchdowns came via walk-ons, and walk-on defensive back Malcolm Jones led the game in rushing. And the crowd was more like 40,000.

What did we learn about the Gators on Saturday? Nothing, and I think everyone would be happier if the game hadn't taken place in public. Fans hoping for a revamped offense and new-look Brantley got more of the same, opening the team up to criticism it probably doesn't deserve and definitely doesn't need. After all, with a ton of key injuries and only a few weeks to learn new schemes from the ground up, how was this team going to look good?

If the object of a spring game is to make the team better, stick with the philosophy used for the rest of spring practice and conduct it in private. If the goal is to entertain fans, why not have a skills competition or something? Let Caleb Sturgis try outrgeous field goals, have a QB trick shot contest, make Chris Rainey race a horse -- do anything other than subject everyone to what we watched in The Swamp.

Maybe that's just me. And even though there are lots of excuses to make for UF's offense, including the fact that Charlie Weis isn't going to pull out all the stops in spring, it still looked worse than I thought. This was the fewest points ever scored by a winning team in the spring game, and Blue tied a record-low for completions at six. And both teams combined for just 340 yards. Ew.

Now, Andre Debose, Jeff Demps, Trey Burton, Mike Gillislee, Mack Brown and Mike Blakely were all out, leaving Rainey as the only true running back. And injuries to Xavier Nixon, Matt Patchan, Nick Alajajian and probably like 25 other linemen I'm forgetting made the offensive line a major problem.

But on the plus side, those injuries set up the lone bright spot of the afternoon: Sharrif Floyd and Dominique Easley destroying Brantley's pocket like Uncle Sam's about to do to mine when I finally file my taxes. They were in his face just about every play, leading to the quote of the day:

"I wouldn't call John Brantley's play today a struggle. I would call it, 'Not enough room,'" Floyd said. "Me and Dominique Easley collapsed the pocket. We forced offensive linemen into his face, and he had to roll out. That's just how our d-line plays. We play physical."

Indeed, those two looked great, and Ronald Powell was solid as well. Easley did come off the field late with an injury, but coach Will Muschamp said, "Easley is fine. Easley got tired, alright?" That trio is one of the few reasons to get excited about this team that's founded in some kind of solid evidence. They're all talented and look ready to break out, though Muschamp pointed out they still need some refining. Once they do that, Floyd said, "We will be completely unstoppable."

Meanwhile, I don't see how the same could be said of the offense. Not to pick on Brantley too much because, as I've said many times, he's a great person and has handled a very difficult situation in a professional manner, but he just doesn't seem to have it. Muschamp said he'd be the starter if the season began today, and he added that Brantley completed 70 percent of his passes in spring practice, which has to count warm-up throws to stationary targets not named Deonte Thompson (who, by the way, added to his already-impressive portfolio of drops by mishandling a reverse).

The other concerning thing about Brantley: The question of whether he looked the same Saturday as he had throughout spring practice was asked to Muschamp, Brantley and several other players. Everyone said he was his usual self in the spring game, which is scary. It's even scarier that they all appear to think that's a good thing, but hey, there's really no point in them bad-mouthing him.

As for the alternatives, Tyler Murphy and Jeff Driskel looked all right. Both out-did Brantley numbers-wise, but neither was that impressive. And to remind everyone of just what they're missing on offense, Tim Tebow, Danny Wuerffel and Steve Spurrier were honored at halftime with statues to commemorate their Heisman Trophies. 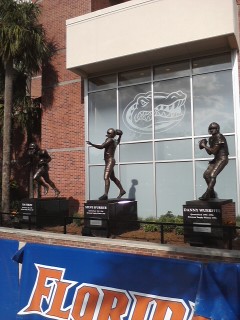 Spurrier's daughter accepted the statue for him, while he sent in a video message to fans (wearing a Gamecocks shirt in front of their logo), and Tebow and Wuerffel were there in person. Unsurprisingly, the biggest ovations of the day were for Tebow -- once when he was introduced and once when he picked up an errant Brantley pass and tossed it back.

That was a cool ceremony, and the statues are definitely worth a look next time you're near the stadium (located on the west side near the O'Connell Center). A reporter joked with Tebow that his was the only one not in a throwing pose, but it still looks pretty badass.

But besides the statues and defensive line, I'm not sure how many other positives you can take from this game. Oh, here's one: Kyle Christy tied the spring game record for longest punt at 55 yards. And they hype around Quinton Dunbar is sounding more and more legit. He ran with the first team, and they called a deep ball to him on the first play. Last year, the same call led to a long catch by Thompson, but this one was a bit underthrown with good coverage and was incomplete. But Muschamp repeatedly praised Dunbar after the game, so it's looking like he's your 2011 deep threat. We'll see if the ball ever meets him down there.

So how'd you feel about this game? Agree with me that it'd be better off behind closed curtains? Think I'm blowing it out of proportion and that they weren't really that bad? Can Kyle Christy take home the Ray Guy Award this year?