« Still plenty of mysteries, but here are my guarantees about the UF offense | Main | This wasn't the debut the Gators hoped for »

W2W4 in the Orange and Blue Debut 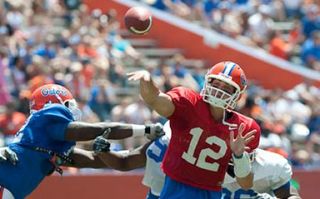 Ah, the spring football game, where all of our questions will be answered and where we find out exactly who the playmakers are. Like last year, where John Brantley and Carl Moore came out and established themselves as one of the best combos in the SEC and Deonte Thompson showed flashes of why he'd be one of the nation's premier deep threats. Wait a minute...

My point is, don't get too carried away with Saturday's Orange & Blue Debut. It's a (very, very) glorified scrimmage for a team dealing with injuries and players who can't possibly have mastered the new schemes on offense or defense. So what can we get out of this? First, we at least get to watch some football. After a spring of closed practices, it'll be interesting to watch the Gators do just about anything, but there are a few players to keep an eye on.

Obviously, the senior-to-be is the key to the offense. If he reprises his role as [demeaning nickname for Mr. Brantley redacted per UF request. I was a bit harsh here, and I apologize to anyone who may have been offended. Namely, Brantley] next season, the Gators are doomed. He hardly ever showed flashes of his alleged talent last year, lost his grip on the position and was rarely a threat to opposing defenses. Blame Steve Addazio all you want, but good players still shine through crappy play-calling on occasion. Brantley never did that, save for that catch he made of a deflected pass for a loss of yardage. That was tight.

So what can you look for out of Brantley that's meaningful? Make sure he doesn't stink. If he looks like I would out there, it's a huge red flag. If he plays super well, it's not that big of a deal because he's supposed to.

The Miami native has drawn rave reviews from teammates and coaches, and now's his chance to show off. The Gators are in desperate need of a downfield playmaker, and Dunbar is supposed to be that guy based on what we've heard out of practice. I don't buy any of this until I see it with my own eyes, and even though a big showing doesn't guarantee Dunbar will shine next year, he needs to display some of the talent we keep hearing about.

Chris Dunkley is suspended for academic issues and Andre Debose has apparently still not made the kind of impression that everyone keeps waiting for, so Dunbar is the best bet to step up alongside Frankie Hammond, Omarius Hines and Deonte.

Harrison moved from guard to center this off-season, and now that everyone in Gainesville knows how crucial it is to have a functional snapper, there ought to be lots of eyes on his play. There's expected to be a lot less shotgun this season, so his job should be easier than Mike Pouncey's, but he's still the leader on a line that only brings back Xavier Nixon, who might miss Saturday's game with an ankle injury. Also, it'll be interesting to see how Harrison deals with the next guy on this list.

To put it bluntly, Easley was a little [again, redacted per UF request. Let's say "problem child"] last year. He couldn't handle going from five-star stud to a freshman on the bench. He clashed with older players. He skipped a practice along with Ronald Powell, and kept bucking the system even after Powell bought into the team concept, leading to Easley being left off the travel roster for the Vanderbilt game. Ouch.

But after Will Muschamp came in and told him "You either do it our way or you leave," Easley seems to have turned a corner. He's come out and talked about his attitude change this spring, and he, Powell and Sharrif Floyd appear to have a prettty good relationship to match their outrageous potential on the defensive line. One thing no one has ever questioned is Easley's talent, and he's been singled out as one of the top defensive performers in camp.

My biggest gripe with d-linemen is often their effort level. You can see the talent is there, but it's frustrating when they don't make the most of it (looking at you, Carlos Dunlap). A spring game is a good time to measure that work ethic. If Easley shows up and goes beast mode, it's a good bet that his head is in the right place. Powell and Floyd will be fun to watch too, but we've seen enough of them to know what they're capable of.

This one's a bit tricky, as depth issues at tight end have forced Christian to play at his old position in recent practices, but he's expected to start alongside Jelani Jenkins and Jon Bostic at linebacker, and Saturday should be our first glimpse of him on defense. The part of his job that requires covering tight ends shouldn't be hard because he was one, but I'm interested to see his instincts and how comfortable he looks in his new spot.

Matt Elam needs to be the cornerstone of the secondary. Janoris Jenkins is the best player, but he's less of a veteran leader and more of the shutdown corner who just does his own thing. Elam has to fill the void Ahmad Black leaves behind, which is crucial. He said being vocal isn't his forte but that he's trying, so I'm interested to see how he looks tomorrow.

Chris Rainey always seems to have a few insane plays in the spring game, and I'd look for more of that. Also, he now has the chance to play like he did in high school, taking hand-offs deep in the backfield, picking a hole and darting between linemen, and he should be fun to watch.

Jordan Reed is a full-time tight end again and needs to be a big target in the passing game, and he'll be important as a blocker too. That's been an adjustment for him, so seeing how he handles guys like Powell is key.

And obviously, we get our first look at The Man tomorrow. Jeff Driskel and Tyler Murphy don't appear to have blown the doors off practice, but it's important they keep some pressure on Brantley.

Overall, this is a team with plenty of unsettled position battles, so effort should be top notch. I'm a fan of this year's format. Rather than split the players up randomly into two groups, it'll be the first-team offense (Blue) vs. the first-team defense (Orange), while the second-team offense (Orange) will face the second-team defense (Blue). That should give us the best look at these guys in the most competitive environment, and they're leaving room for some fun too.

Four "Guest Media Coaches" will get a chance to call some plays. The Gainesville Sun's Pat Dooley and Tampa Tribune's Joe Henderson will work with the Blue team, while the Orlando Sentinel's Mike Bianchi and WRUF's Steve Russell will "help" the Orange team. My money's on Russell to do the best job since I know he coaches youth sports. Word is that I didn't get a call because Muschamp is worried about getting shown up by a kid.

One last note, Muschamp took the team to play paintball Thursday rather than practice. Pretty cool.

Thoughts? What are you most looking forward to on Saturday?