« He gone: Jenkins off the team, and I think it's a mistake | Main | Florida gets a trick-shot video of its own »

If you go to a Gator Club outing, wear a belt: Muschamp might charm the pants off you 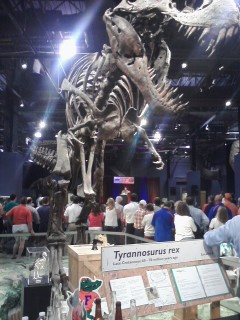 Did You Know: While examining fossilized stomach contents of the Xiphactinus audax, a predatory fish from the Late Cretaceous period, researchers were able to determine that the animal swallowed its last meal (a 6-foot-long fish) whole, and the prey thrashed around in the Xiphactinus' stomach until it choked it?

Pretty crazy right? Well, that's the most interesting thing I learned during Will Muschamp's speech to the Central Florida Gator Club on Tuesday night, which took place in the surreal setting of the Orlando Science Center's dinosaur exhibit, hence the photo (that's Muschamp in the middle below the banner) and newfound knowledge.

OK, OK, I'm kidding (but not about the location). In fact, Muschamp was his usual, engaging self on the evening, offering a masterful blend of preaching core values while also keeping people laughing. He has six stops left on his tour (schedule here), which feels like a string of stump speeches where he's campaigning for Gators fans to love him. He's doing a great job.

I got a little risky with that lead-in, but if you're still with me, here are some notable moments:

Now, Muschamp is really a hit on the road with his southern charm and embrace of UF history, but I've picked up a sentiment that's really alarming. I've heard/seen a few comments of fans griping about Urban's personality (or lack thereof), such as the guy in front of me Tuesday, who said "Urban would have been on his plane back to Gainesville right now." Well yea, he needed a little extra time to get through security because of those rings on his fingers.

But that got me wondering how widespread the feeling is. Meyer was always an outsider in the south whereas Muschamp is a good ol' boy, but does that matter to you? It clearly does to some, and from what I saw in Orlando, that's probably only going to spread from here.

In my mind, Meyer should be unassailable based on the success he had here. It will likely never be replicated, but I'm becoming increasingly convinced that Meyer will always rank below Steve Spurrier and any other winning coach who has the right accent. What are your thoughts?

And if you have any other thoughts or questions, fire away. There was a lot of other material I'm not about to cram in here, and if I can't answer your question now, I'll ask The Man at the next Gator Club event I go to.