There were some surprises on Florida's first depth chart since spring, but coach Will Muschamp cautioned that the list was tentative, saying it “certainly can change as we work through the week.”
Muschamp said offensive line and secondary are both positions that are still very much up in the air. Take a look at cornerback on the chart below to see what I mean. Muschamp said the final week of practice would determine the starters.
“All of those positions are a little bit up for grabs as far as who practices the best.”
“I’m young, but I’m old-fashioned and generally how you play is how you practice," Muschamp said. "Nobody, in my opinion, has separated themselves to be named the starter here Monday before our first game.”

Here's how it looks: 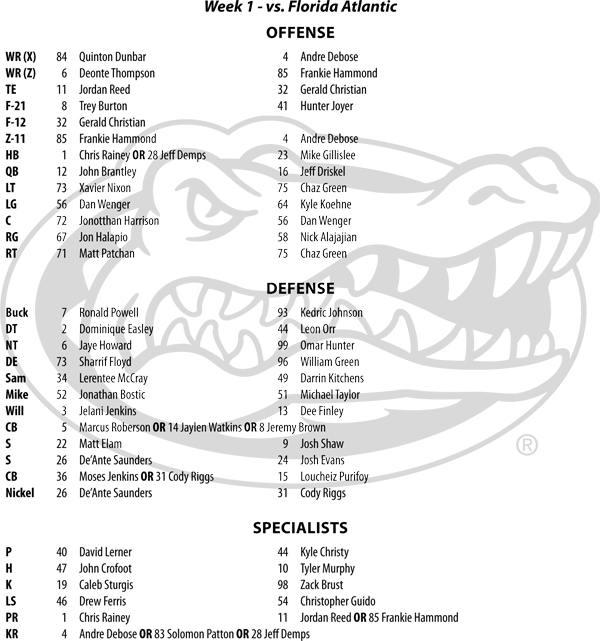 Apparently, Florida coach Will Muschamp wasn't pleased with his team's effort in a team scrimmage Wednesday. It was cut short by more than 30 minutes, leading to Muschamp's scheduled press conference being pushed up.

"We did not execute very well," a seemingly frustrated Muschamp said. "Mental toughness was not there. Very immature football team at this point not consistently performing at the level we need to perform at.

While Muschamp wouldn't call the scrimmage — the same one he said would cost potential starters their jobs — a step backward, he did have this gem: “It dang sure wasn’t a step forward.”

But, coming from Muschamp, can we really believe anything he says at this point? Who knows if practice was bad? Practice is closed. It has been since spring. The only people that know what's going on aren't talking about it. Players are coached up on what to say, and what not to say.

To that end, it's this writer's opinion that Muschamp and his staff realized that the spewing overload of positive spin coming from the program was just too much.

Florida realized that people were starting to expect, at the very least, a very competitive football team this fall. Last night's verbal beatdown by Muschamp was merely a tempering of expectations and a motivational ploy for some camp-lethargic players.

"He just wants us to know that we’re not who we’re supposed to be yet," he said.

Easley said Wednesday's scrimmage wasn't actually that bad. In fact, it was an improvement over the previous two.

"From my perspective, everything went good," Easley said. "Obviously some things went bad. Every team, certain things go bad. But the way I look at it everything went good. He seemed a little upset because some plays went wrong, some people didn’t do what they were supposed to be doing, but that happens every where."

The fact is this team isn't where Muschamp, or the rabid fans of Gator Nation, expect it to be. There is a minimal senior presence, and a lot of the more-talented players on the roster are underclassmen. Add a brand new coaching staff and a complicated pro-style scheme on both sides of the ball to the mix and what you get is a mentally confused, young football team.

There will be growing pains this fall. There aren't many guarantees around this team, but that much you can count on.

"If we played tonight, I couldn’t even tell you [what would happen]," Demps said. "I’m pretty sure guys would go out and compete and play as hard as they can, but as far as just mentally being there, I’m not sure."

Florida cornerback Jeremy Brown reportedly out up to 3 weeks

Junior cornerback Jeremy Brown, who is expected to compete for a starting role this season, has been held out of practice this week with a knee injury, a source close to the team told alligatorSports Wednesday.

Brown is expected to miss up to three weeks after injuring his knee in practice last week. A UF spokesperson declined comment until coach Will Muschamp can address the media. Muschamp said recently he is the only team source for injury-related news.

"It's not the NFL. We don't have to disclose anything," he said.

Muschamp's next scheduled media session is set for Saturday.

Chris Rainey has a word for opposing defenses

With the reported resurgence of Chris Rainey and the return of Jeff Demps for his senior season, all indications point to the Gators backfield as the strength of the offense in 2011.

Asked about Trey Burton’s new F-21 role — a hybrid blend of fullback, slot receiver and short-yardage running back — and the combination of talent in the backfield, Rainey, exuding confidence, summed it up.

“We’re going to be giving a lot of defenses hell this year,” he said, carefully picking the right words through a wry smile. "We've got different athletes everywhere and they can't focus on one person."

Rainey missed five games last season after he was suspended following his much-publicized arrest, but teammates and coaches have praised Rainey's approach during the offseason, saying he has matured.

Burton, Rainey and Demps combined for 1,808 yards from scrimmage in 2010 out of Urban Meyer's spread offense. And new offensive coordinator Charlie Weis has raved about the speed of the Florida offense, saying he's never had anything like it.  One of the more heralded offensive gurus around, Weis has elaborate plans to get his playmakers the ball in space.

"It’s interesting to talk to Charlie and look at the different ways we are going to get those guys the football," coach Will Muschamp said recently. "Because that’s the bottom line at the end of the day, is getting [it to] those guys [at] the playmaker positions."

With quarterback John Brantley's ability to succeed in the Southeastern Conference still in doubt, the backfield will likely be leaned on early to carry the offense. Rainey, Demps and Burton are all in line for big years should they remain healthy.