The Dee Finley Saga -- Why You Shouldn't Expect A Suspension

When news first broke Monday that Gators backup linebacker Dee Finley was arrested and charged with a third-degree felony charge of resisting arrest with violence, troubling visions came to mind. Did Finley hit a police officer? Did he get Tased? What the hell happened?

Actually, it was nothing like that. Finley is not a felon and should not be labeled or treated as such.

And with the news Tuesday that the State Attorney has reduced Finley's charges, it would not surprise me to see little or no punishment come his way.

Before you explode, let me explain.

Mark Long of the Associated Press is reporting that his felony charge has been reduced to a misdemeanor charge of resisting arrest without violence. Reading the initial police report, it seemed a little fishy to me, and this reduction does not surprise me at all.

Here's why: The University Police Department, and the arresting officer in particular, has quite a checkered past.

From accusations of officers egging hookers, to fighting motorists in a fit of road rage, to threatening to shoot a kid during a traffic stop, the UPD has never been the beacon of upstanding and honorable law enforcement. The case is no different with Dee Finley.

The arresting officer in Finley's case, William Sasser, was one of five UPD officers involved in the shooting of UF doctoral student Kofi Adu-Brempong in 2010. Sasser was a part of the UPD's Critical Incident Response Team — their version of S.W.A.T.  But he was reassigned (read: demoted) following the incident.  He was also reprimanded in February 2010 for handcuffing a student to a stop sign. He's been suspended, crashed multiple police vehicles and he even admitted to taking speed and getting a DUI. Stand-up guy, eh? Read more about Sasser here.

From reading the vague police report, and this is purely speculation at this point, the area where Finley was stopped is very close to the access ramp to the football locker rooms and training areas. While through traffic is not allowed past the barricade that Finley supposedly avoided, players and football staff generally are. Most players park their scooters under the ramp to go to meetings, workouts or class, and they must pass the barricade to get there.

Now, before you accuse me of defending Finley outright, let me say this. Nothing can change the simple fact that Finley should not have been driving. I don't care if it's just a scooter on campus. The man has four — FOUR! — tickets in three years for driving on a suspended license or a similar charge. His license is suspended in Florida and his home state of Alabama. He has an open case for one of those charges. He knows he shouldn't be driving.

But if you watch the video that recently resulted in a UPD officer's overdue firing, and you consider the questionable reputation of Sasser, it's not hard to envision a different scenario than the one he filed in his report (see below).

The fact that the State Attorney reduced the charge to a misdemeanor offense means he disagrees with Sasser's assessment of the crime, if indeed a crime really was committed. With Gators Super Attorney Huntley Johnson on the case, I wouldn't be surprised if the resisting arrest charge is dropped completely.

“The State Attorney reviewed the case and decided to treat it as a misdemeanor,” Johnson told the Gainesville Sun. “I did not see resisting with violence in the description in the police report.”

Me either, Huntley. Me either.

I also don't expect Finley to be publicly disciplined for his alleged misconduct. Players are very rarely, if ever, suspended for traffic violations, which, at the end of the day, is what this whole saga is about.

I'll say it again: Finley is not a felon and should not be labeled or treated as such. 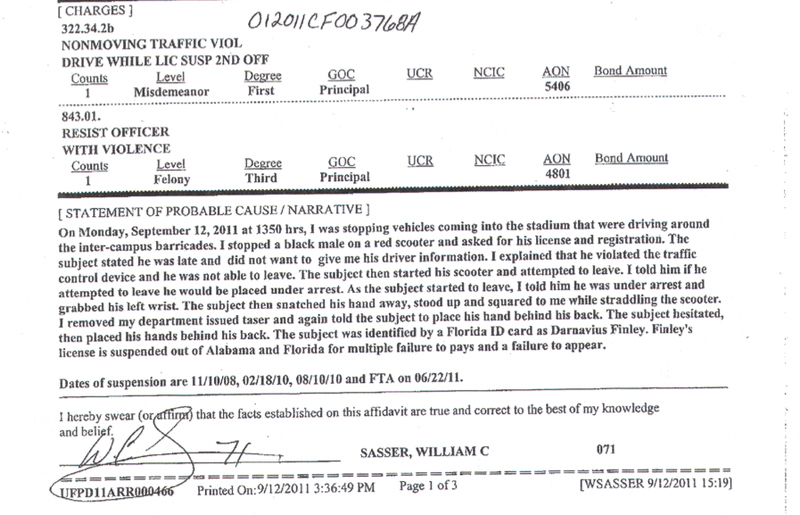