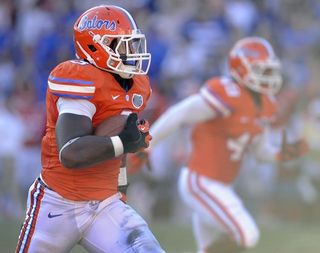 Linebacker Jelani Jenkins (3) runs for a touchdown after picking up a blocked punt during the second half of Florida's game against Louisiana-Lafayette on Nov. 10. Florida won 27-20. (AP Photo/Phil Sandlin)

Jenkins had surgery on the foot Monday and Muschamp said he will be out for four to six weeks.

"It’s a medical term for it," Muschamp said. "It’s a small bone in his foot. Should be fine. It’s a four- to six-week recovery time, and he’ll be fine."

Jenkins was in street clothes with his foot in a boot and using crutches while the Gators celebrated their win against the Seminoles in Tallahassee. He spoke to reporters afterward but said he did not know the extent of the injury at the time.

A redshirt junior, Jenkins missed four games earlier in the season due to a broken thumb that also required surgery. Jenkins also left Florida's game against Georgia without recording a tackle after injuring his hamstring. Jenkins finished the season with 29 tackles, including five tackles for a loss,two sacks and one interception.

He will be replaced by freshman Antonio Morrison, who stepped in Saturday against Florida State and caused the fumble of quarterback EJ Manuel that helped Florida take over the game. Morrison delivered a punishing hit on the play, sending Manuel to the sideline to be evaluated by the Seminoles' medical staff. He missed FSU's next offensive series but did return to the game.

"He does that in practice," Jenkins said of Morrison. "There's nothing abnormal about that. He's a big playmaker. A big hitter. He loves to hit."

The question now becomes whether or not Jenkins returns for his senior season at Florida.

Earlier this season, ESPN analyst Todd McShay said on a conference call with reporters that Jenkins is "the best cover linebacker in college football today" when healthy. McShay said Jenkins' speed, instincts and anticipation in coverage mean he could be selected as early as the second or third round of the NFL Draft in April should he choose to forgo his final year of eligibility.

It's unclear how injuries could affect that projection, but there is a possibility Jenkins has played his last game as a Gator.

Notes: Quarterback Jeff Driskel (ankle) is wearing a walking boot, but Muschamp said it is just to treat soreness. Driskel is expected to be fully healthy for the bowl game. ... Center Jonotthan Harrison (ankle) is also in a boot for precautionary reasons. ... Linebacker Neiron Ball (ankle) will return for Florida's bowl game after missing the last two games. ... Reserve offensive lineman Ian Silberman (torn labrum) will miss the bowl game.