GAINESVILLE -- Florida’s M.A.S.H. unit is running out of space.

Left tackle Tyler Moore is the latest UF player sidelined for the season after the sophomore Nebraska-transfer fractured his right elbow in a scooter accident Tuesday night.

“It’s unfortunate, but somebody else needs to step up and play productive football,” coach Will Muschamp said. “In all these situations, I feel for the player.”

Moore -- UF’s ninth player and sixth starter to suffer a season-ending injury in 2013 -- had surgery to repair a gruesome compound fracture Wednesday morning.

“Tyler was riding home on a scooter, and he came around a curve there and the back tire came out from underneath him,” Muschamp said.

Moore, who started six games this season, struggled mightily in a dismal performance against Missouri and the right tackle was actually benched early last week. But after starting left tackle D.J. Humphries sprained his left MCL in practice, Moore reentered the starting lineup and rebounded with his best performance of the season against Georgia. 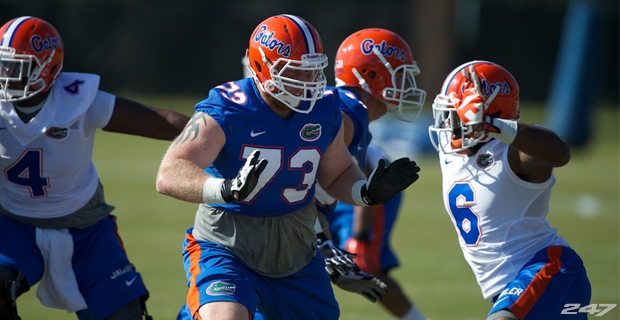 “I felt pretty good, especially playing a new position I haven’t played in I don’t know how long,” Moore said Tuesday before practice. “I havent played that in a long time. In a new position and only having a few days to get ready, I felt good.”