Florida climbed to No. 2 in both national polls Monday, receiving a single first place vote in the Associated Press Top 25. The Gators appear destined for a No. 1 or No. 2 seed in the NCAA Tournament and are (almost) assured of playing in Orlando for the second/third rounds.

Meanwhile, point guard Kasey Hill is doubtful for tomorrow's game against Auburn after injurying his groin in the win over Kentucky.

Head coach Billy Donovan said Monday, "I would not anticipate him playing Wednesday."

FootballScoop.com first reported Darveau's move, but UF has yet to confirm the news.

Will Muschamp's staff is full (all 10 spots filled), so Darveau's position is unknown. The former Louisville offensive tackle could be assigned quality control responsibilities or come on as a graduate assistant.

Miami Belen Jesuit placekicker Jorge Powell will walk-on at Florida, according to the Miami Herald's own Safid Deen.

According to The Gainesville Sun, Powell's father attended Florida and the placekicker wanted to play closer to home.

On Feb. 4, The Moultrie Observer published a piece on Florida redshirt freshman Octavius Jackson and the offensive lineman's persistent, but failing battle with multiple shoulder injuries.

Muschamp touted Jackson as one of UF's most promising linemen throughout the fall, but it appears the Colquitt County High standout will never play for the Gators following career-ending surgery. 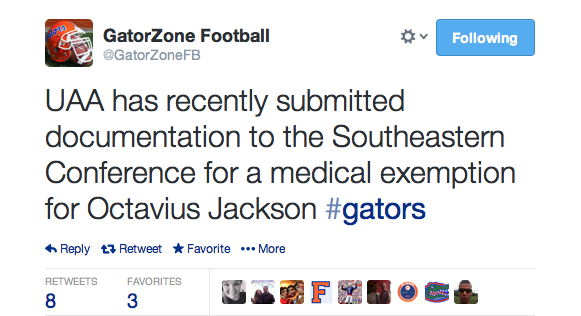 According to ESPN.com, the teams will all travel together on a single charted airplane. Michigan State athletic director Mark Hollis, an innovator in creative college basketball events including the first aircraft carrier game, is the brainchild for the non-conference showcase tour.

STAT OF THE DAY

Gators point guard Scottie Wilbekin tallied 44 points (21 at Tennessee, 23 at UK), eight assists and zero turnovers in Florida two major road wins last week. Monday, UF's senior leader was named the SEC Player of the Week and one of 23 finalists for the Cousy Award, given to the nation's top college point guard.