HOOPS: How to win at Rupp (and what it means)

GAINESVILLE -- From the wonderful wisdom of Ice-T: "Pimpin' ain't easy, but some somebody gotta do it."

No. 3 Florida won in Lexington for the first time since 2007, downing the talented Wildcats 69-59 for a significant victory.

The Gators extended their winning streak to 17 games and for all intents and purposes (likely) locked up the Southeastern Conference regular season title.

Comparisons (however faulty and careless) to the Oh-Fours are already trickling out, but the one definitive trait the two groups have/had in common: An obsession -- and joy -- in winning.

Florida's victory at Tennessee on Tuesday night was nice and full of fortunate happenstances, but Patric Young's Herculean-save exemplified this team's horror of losing. 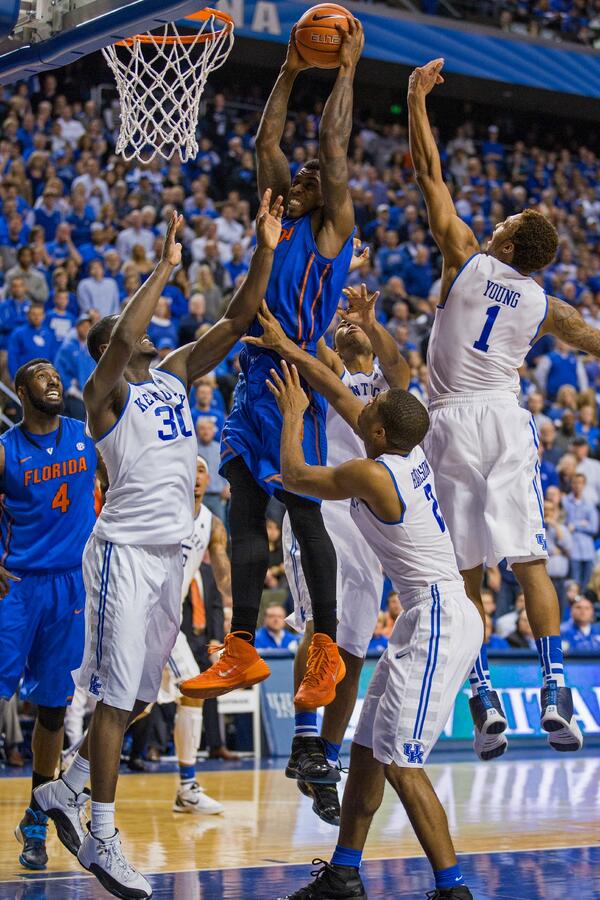 Saturday's victory in Rupp Arena was an efficient, fastidious evisceration over perhaps "the most talented team in the country."

Although "youth versus experience" became the anti-narrative leading up to the marquee matchup, the game played out as initially presumed.

Senior point guard Scottie Wilbekin was fantastic, finishing with a career-high 23 points, zero turnovers and all the poise. The (potential) frontrunner for SEC POY was also 11-of-12 from the charity stripe in the face of a hostile crowd -- only missing his final attempt.

How did the Gators win in Rupp Arena shooting just 44 percent from the field -- including 3-for-13 from downtown -- and getting gashed (comparatively speaking) defensively in the first half?

* Florida scored an insane 2.21 points per possession over the final 10+ minutes of the game. UF's efficient offense -- led by Wilbekin's weaving penetration -- ultimately won the game for the Gators.

* The Gators had just five turnovers -- two from a pair of role players who combined for less than 20 minutes of action.

* For the all the talk of UK's dominance on the offensive glass, the Gators actually out-rebounded the Wildcats 10-9 -- the dagger Prather's board with 1:25 remaining in a five-point game.

Instead, "Wrangled at Rupp" simply confirmed what many already knew: Florida is a damn fine team -- and seemingly getting better -- with a legitimate shot at bringing Billy Donovan his third national title.

The Gators -- dangerous and hungry -- have played like a championship-caliber team for nearly two months, and although their primetime win at No. 14 Kentucky suddenly vaulted them into the title discourse for the national press, they should've been the talk of college hoops already.