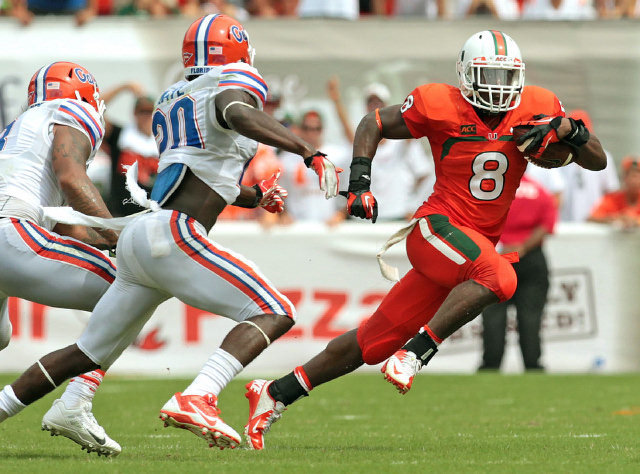 GAINESVILLE -- Florida will release its 2014 depth chart on Tuesday.

Really it’s a crapshoot. Florida rotates a ton of players, so the two-deep is probably written in pencil anyways.

But here she goes.

I should note: This is both my best guess at UF’s listed depth chart coupled with reading between the coach-parlance and listing who actually is second string on the field … and not on a piece of paper.

For example: Trip Thurman will not be listed as the backup at three positions, but rest assured, he is Florida’s super-sub offensive lineman and will be the first guy off the bench if any of the regulars inside go down.

Harris wins the quarterback battle with his ability as a special package runner.

The wideout positions are a mess, as Florida will move Dunbar around to get Robinson on the field with Fulwood. Alvin Bailey and Andre Debose aren’t listed, but both receivers will figure into the mix.

The tight end and ‘B’ positions are tricky -- and perhaps the most interesting note to examine when the official depth chart is released. Where exactly is Jones listed? Guys like Hunter Joyer and DeAndre Goolsby will see snaps. But how many, and where, is largely dependent on how the Gators designate Jones and McGee.

Mack Brown is probably the technical backup tailback, but he won’t see traditional No. 2 carries with Jones and Brandon Powell vying for snaps.

Lastly, Green or Brown could be the backup left tackle, but recently, Muschamp has praised the efforts of Johnson.

The front-seven is rather straightforward. Davis didn’t do enough in camp to warrant a starting gig over Morrison or Taylor, but he’ll play plenty. The backup SAM spot is whatever, as even Ball won’t be on the field all that much.

Hargreaves and Neal are assured starters. Beyond that? It’s secondary roulette. Poole, Maye and Gorman could all be shuffled around.

In truth, I have the least confidence in Harris as a No. 2 safety, but where exactly the freshmen corners slide in is anyone's guess too. Jackson was the best in camp, but Tabor has the most upside. They’ll both play a lot. Nick Washington could sneak his way into a rotational spot at safety (over Dawson) if Duke moves to nickel.

Townsend is a natural redshirt candidate, while the competition at kicker probably never ends all season. Velez earning a scholarship could be nothing more than a generous gesture to a hard-working fifth-year senior, or it’s a wake-up call to Hardin.