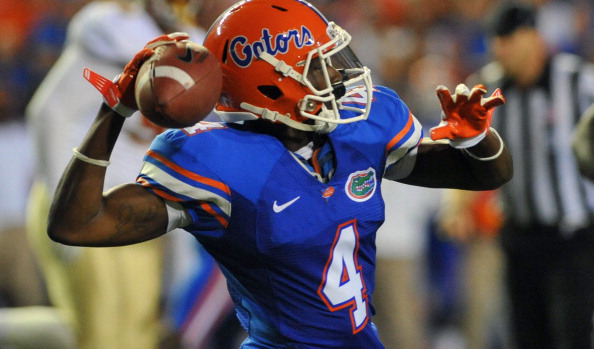 GAINESVILLE – In today’s Miami Herald, I wrote a story on Florida’s receivers and how they’re ready to step up in Kurt Roper’s spread offense.

I know, it's about time.

But for the first time since 2009, an unproductive unit is suddenly a team strength with as many as nine contributors competing for playing time.

Enigmatic sixth-year senior Andre Debose is the X-factor in the group, returning to school for a final season after sustaining a season-ending knee injury in last year’s training camp.

The former five-star recruit was once (famously) billed as Florida’s next Percy Harvin, but Debose’s career has been plagued by injuries and inconsistencies and Urban Meyer’s pressure-filled premonition has never come to pass.

"I’ve been grinding man. I’m feeling real good. I wouldn’t say I’m completely 100 percent, but mentally I’m almost there. I’m still trying to strengthen my leg up, but as far as practice goes I’m full go. No worries. Nothing. I’ll be ready.”

On the new offense…

“It’s definitely exciting. I was recruited to play in a spread offense. It’s something that’s been in my mind. I’m finally in the offense I came to play in. I’m definitely excited about it. With all our young receivers I feel like all of us are going to flourish in the offense because it is a spread. The wideouts play a big part of it. With the ball in space a lot of us can get the job done.”

On a renewed perspective after so many falls in Gainesville...

“I take everyday like it’s my last. I will never have another media day like this. I will never have another first practice, second day. If I had a message to say to a young guy it would be to say, ‘Take everyday like it’s your last. You never know when it’s the end.’ I have a whole different perspective from when I was a young guy. I used to take a lot of stuff for granted. Practicing, just going through the motions, something I’d never do now. Enjoy everything you do.”

On Joker Phillips' abruptly exit and Debose's sixth position coach in as many seasons...

“It was definitely unexpected. I had just had a long conversation with Coach [Phillips] before he later told us the message he was leaving. It was unexpected, but I’ve been through it before so it really wasn’t a big deal to me. [Laughs] At the end of the day it’s us playing on the field, and there’s only so much they can teach us. I just started to develop a relationship with him, but it really wasn’t a shock to me since I’ve had now six different receivers coaches. It wasn't something I haven’t been through before.”

"The injury was a humbling experience. I wouldn’t put my worst enemy in that position. Being a senior, finally get my chance to really play and then it just all goes away. I wouldn’t put those emotions on nobody. With that being said, I’m just enjoying the process. I never would’ve thought I’d been in this position again, today."