GAINESVILLE -- Florida’s bats were held quiet against Virginia, but the Gators brought the thunder Tuesday night, ending Miami’s season with a bang to stave off elimination at the College World Series.

* The four long balls were the most in a CWS game at TD Ameritrade Park. 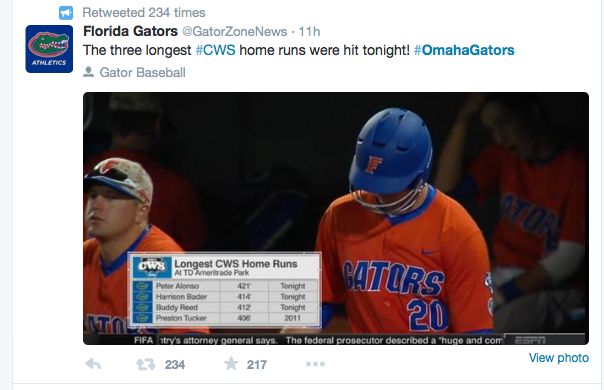 * Florida left fielder Harrison Bader became the first player since 2008 to leadoff a CWS game with a home run.

* The Gators outscored the Hurricanes 25-5 in two games in Omaha.

* UF has won 21-of-26 over UM, including eight consecutive postseason matchups. In a related note, Florida coach Kevin O’Sullivan has never lost to the Canes in the NCAA Tournament.

* Florida ended Miami’s season for the fourth time since 2009.

UF is now set for a rematch with Virginia on Friday (3 p.m., ESPN2). UF must beat UVA twice to advance to the CWS Finals after losing to the Cavaliers 1-0 on Monday evening.

Posted by Jesse Simonton 06/18/2015 at 10:01 AM in Florida Gators, UF Basketball Recruiting, University of Florida vs. University of Miami | Permalink