The silliness in debating Florida's G.O.A.T

GAINESVILLE -- During Sunday's closing minutes of the USWNT’s 5-2 romp in the World Cup final, ESPN writer (and friend of the blog) Edward Aschoff posted a simple but inevitably controversial tweet: 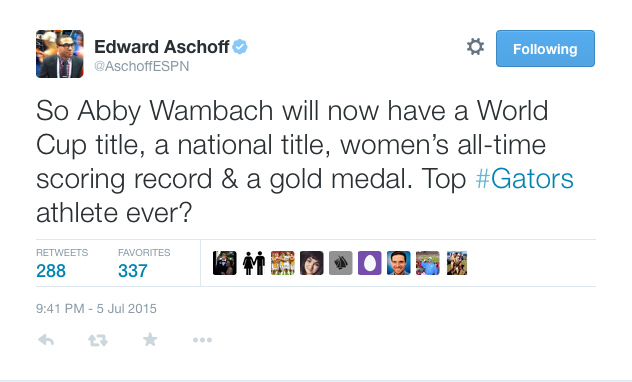 Predictably, most of Twitter told Aschoff he was wrong.

Really though, determining THE GREATEST GATOR EVER is an exercise in futility. It’s a silly (but entertaining) debate, with an endless string of points and counter points. It's a deep-dive into subjective questions and criteria as ridiculous and polarizing as Game of Thrones theories.

So instead of determining the impossible, let's use Wambach (and others) as an example of the craziness of the conversation on just who is Florida’s G.O.A.T.

Therein lies the crux of the issue. Florida’s bread is buttered on the gridiron, so debate angles such as -- Should collegiate legacy trump professional accomplishments? Should the popularity of the sport matter? Does decorated equal greatest? What about top athletes (i.e. softball stud Lauren Haeger) with few professional opportunities? -- are all trumped by did athlete X play football.

Is that fair? No. But checkout Aschoff's feed. It's the prevailing opinion.

The number of people who did or didn’t watch Wambach & Co. at Florida probably shouldn’t matter so much, yet it does.

So since football is king, Emmitt Smith -- Twitter’s most popular choice -- would stand as UF's top athlete ever, right?

Smith -- a Hall of Famer, the NFL’s all-time leading rusher and a 3X Super Bowl champion -- has had an arms-distance relationship with his alma mater. He actually left UF with the school's career rushing mark only to see his record later eclipsed. But since Smith hasn’t always embraced his Gators roots, he’s not on many Florida fans’ Mount Rushmore (That’d be Tebow, Spurrier, Wuerffel, Noah).

Does that matter? Should Florida's greatest athlete ever stand alongside it's most popular athletes ever?

See, it's a subjective debate with all the circular logic and silliness of an episode of Seinfeld.

I’m sticking with Kerwin Bell though.