The 25th-ranked Florida Gators on Monday released their depth chart for Saturday’s season opener against UMass. Here’s a position-by-position breakdown of the team heading into Week 1:

Redshirt sophomore Luke Del Rio is the starter and Purdue graduate transfer Austin Appleby is his backup. This was to be expected. UF’s scholarship freshmen – Feleipe Franks and Kyle Trask – are still battling for the No. 3 spot. UF coach Jim McElwain said on Monday that he hopes to give both reps early in the season, if possible. “Obviously we have to have an established third at some point,” McElwain said. “We'll kind of see where it goes from there. We haven't made a definitive decision there on that and yet that's something that we need to look down the road at, no doubt about it."

The starting spot is still up for grabs. On the depth chart, UF has the No. 1 back listed as either sophomore Jordan Scarlett OR junior college transfer Mark Thompson OR sophomore Jordan Cronkrite, with redshirt senior Mark Herndon and true freshman Lamical Perine at Nos. 4 and 5, respectively. Cronkrite looked to be the frontrunner during the limited portion of practice the media is allowed to see, but he was “banged up” early last week and missed a pair of practices, allowing Scarlett and Thompson the opportunity to gain traction in the battle. During the Gators’ media day earlier in the month, McElwain viewed the running back group as “being as strong as anything on our football team.” All five have an opportunity to receive playing time in the early going of the season before McElwain decides whether to go with a feature back or use a by-committee approach.

The Gators have junior Brandon Powell and sophomore Antonio Callaway lined up as the starting outside receivers and junior college transfer Dre Massey as the starter in the slot. This is intriguing, as all three provide versatility and speed to the field. However, what they bring in versatility, they lack in size (Callaway is the biggest of the three at 5-11 and 197 pounds). Behind them are the quartet of senior Ahmad Fulwood, junior C.J. Worton and freshmen Josh Hammond and Freddie Swain. Tyrie Cleveland and Rick Wells -- another pair of freshmen -- are suspended for the season opener and therefore not on the depth chart.

With redshirt sophomore C’yontai Lewis suspended, junior DeAndre Goolsby has sole possession of the starting spot for Saturday. He’s the only eligible tight end with valuable playing experience (21 games, six starts). Behind Goolsby are redshirt sophomore Moral Stephens and true sophomore Camrin Knight, a pair which has shown flashes throughout camp but will likely be relegated to spot roles during the season.

The starting five from left to right are as expected: Junior David Sharpe, sophomore Martez Ivey, redshirt junior Cam Dillard, sophomore Tyler Jordan and sophomore Fred Johnson. They are the five most experienced offensive linemen McElwain has at his disposal. Backups to watch out for are redshirt sophomore tackle Kavaris Harkless and freshman Jaawan Taylor. Guard Antonio Riles is out for the year with a torn ACL.

Florida’s listed starting defensive line Bryan Cox Jr. (end), senior Joey Ivie (nose tackle), redshirt junior Caleb Brantley (defensive tackle) and redshirt junior Jordan Sherit (end). Don’t expect the group to stop there, however. With redshirt sophomore Taven Bryan, sophomores CeCe Jefferson and Keivonnis Davis and redshirt freshman Jabari Zuninga in the mix, there will be a continuous battle for playing time along the defensive line. One surprising note: True freshman Antonneous Clayton, the No. 2 ranked defensive end and 26th-best player in the 2016 recruiting class according to 247sports, was not listed on the depth chart.

Florida’s lone three linebackers with playing experience top the chart. Senior Jarrad Davis is in the middle, redshirt junior Alex Anzalone is on the strong side and senior Daniel McMillian is starting on the weak side. Behind them are redshirt freshman Kylan Johnson (a high school quarterback turned safety turned linebacker) and a trio of true freshmen in David Reese, Jeremiah Moon and Vosean Joseph. Expect to see the freshmen receive a heavy dose of playing time early in order to get acclimated to college ball before SEC play.

With All-SEC corner Jalen Tabor suspended for the season opener, junior Duke Dawson is slated to take his place on the outside opposite Quincy Wilson. Dawson, however, is also listed as the starting nickel corner, so if the Gators go with three corners, JuCo transfer Joseph Putu could get some opportunities for extensive playing time. At safety, redshirt senior Marcus Maye has solidified one of the two spots. The second is still up for grabs with redshirt juniors Nick Washington and Marcus Maye vying for the position. Freshman corner Chauncey Gardner should see some playing time early in the year as well.

Basically, the starting spots are as expected here. Eddy Pineiro is the kicker. Johnny Townsend is the punter. The combination of Powell, Massey and Callaway will be used on kickoff and punt returns. One player to look out for: Kicker Jorge Powell, who McElwain said will be utilized for onside kicks.

UF coach Jim McElwain confirmed Monday that sophomore wide receiver Antonio Callaway has been cleared to play in the Gators' season opener on Saturday against UMass.

"He should be ready to go," McElwain said, adding he found out from the university on Friday that Callaway is able to play.

Callaway's status for Saturday was up in the air following a reported sexual assault accusation that had him suspended from the university from January until the start of the Summer B semester in late June. He was found not responsible in the incident during a Title IX hearing on Aug. 12. However, there was controversy surrounding the investigation because the hearing judge -- Jacksonville-based attorney Jake Schickel -- is a UF football and basketball booster. The complainant in the case boycotted the hearing because of it.

Callaway has been practicing with the team since the Gators opened camp in August, with most of his reps being with the first team.

“That guy’s a pretty good player," McElwain said, "so I think it should be pretty good."

While Callaway will line up against the Minutemen, two freshmen receivers will not make their debuts on Saturday.

McElwain said Monday that Tyrie Cleveland and Rick Wells, will be suspended following their BB gun incident in the summer.

Eight Gators made the cut.

Leading the pack for UF are senior linebacker Jarrad Davis and junior defensive back Jalen Tabor, the only two UF players who landed on the 28-member first-team.

Davis is the most experienced returning linebacker on Florida's roster. He finished last season second on the team with 98 tackles — including 11 behind the line of scrimmage — in 14 games. The 6-2, 238-pound linebacker also recorded seven quarterback hurries and 3.5 sacks.

Tabor, an outspoken cornerback, looks to pick up where he left off last season. He led the SEC and was 13th nationally last season with 18 defended passes (4 interceptions, 14 pass breakups). Tabor also recorded two pick-sixes.

Tabor, who was also named to ESPN's preseason All-America first-team, is suspended for Florida's season opener against UMass following a violation of team rules.

SEC West powerhouses Alabama and LSU led the conference with 13 representatives on the three preseason teams, with the Crimson Tide boasting an SEC-best seven first-team members.

Posted by Jordan McPherson at 11:46 AM | Permalink | Comments

Jordan Cronkrite, just like the rest of Florida's running back corps, has impressed second-year UF coach Jim McElwain throughout practice.

But for the next few days, the sophomore will be on the sideline while the rest of the group gets extra reps.

McElwain said Tuesday that Cronkrite was "banged up" during Friday night's scrimmage. He's expected to return to practice on Thursday, McElwain added.

A former standout at Miami's Westminster Christian, Cronkrite is viewed as the front-runner in a deep backfield for the starting running back job left vacant after Kelvin Taylor departed for the NFL.

Last season, Cronkrite finished with 157 yards and three touchdowns on 44 carries. He also had 89 receiving yards and a touchdown on six catches, with his biggest game of his fledgling career coming against South Carolina (6 carries, 24 yards, touchdown; 2 catches, 49 yards, touchdown).

Some other notes from McElwain's press conference on Tuesday:

For the first time since 2013, the Florida Gators will open the football season as a ranked team.

UF checked in at No. 25 in the Associated Press’ preseason Top-25 poll, released on Sunday.

Alabama, the defending national champions, took the top spot in the poll, with Clemson, Oklahoma, Florida State and LSU rounding out the top five.

A poll-high six Southeastern Conference schools are in the AP’s preseason rankings, with Tennessee (No. 9), Ole Miss (No. 11) and Georgia (No. 18) also ranked to begin the season.

The Gators are coming off a 10-4 season in which they won the SEC East. They ended the year -- their first under head coach Jim McElwain -- with three straight losses.

UF opens the season on Sept. 3 against UMass at 7:30 p.m. The game will be televised on the SEC Network. The Gators, also ranked No. 25 in the Amway coaches poll, will face four opponents in the AP’s preseason rankings during the regular season: Tennessee (Sept. 24), LSU (Oct. 8), Georgia (Oct. 29) and Florida State (Nov. 26).

Here is the full breakdown of the AP’s top 25 (first-place votes in parenthesis):

Posted by Jordan McPherson at 10:15 AM | Permalink | Comments 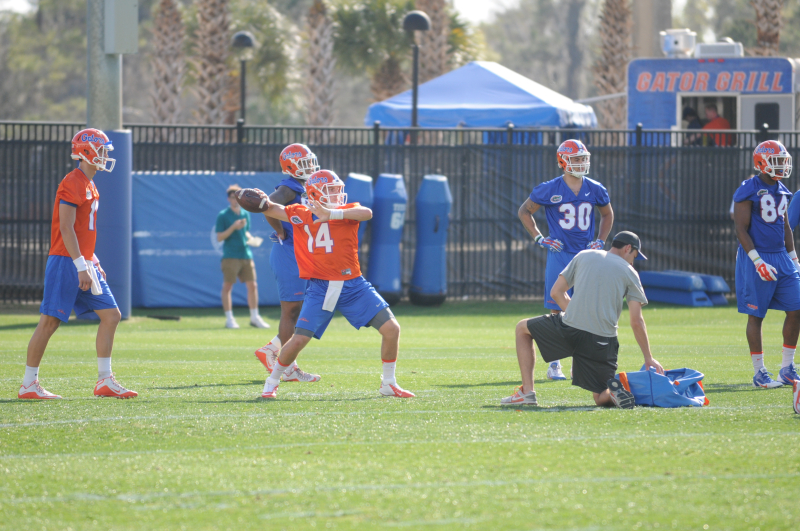 Jim McElwain has found his quarterback.

And as has been expected since Florida’s spring game, it’s redshirt sophomore Luke Del Rio.

The redshirt sophomore quarterback and son of Oakland Raiders head coach Jack Del Rio will take the opening snap against Massachusetts on Sept. 3 when the Gators ring in the 2016 season. He’ll be the Gators eighth starting quarterback since Tim Tebow’s final season in 2009.

"Luke is going to work as the starter the rest of camp and start in the season opener barring any unforeseen development,'' McElwain said in a statement Thursday. "Our other quarterbacks remain in the plans and are ready to move forward and help the Gators any way they can."

Del Rio had been the frontrunner throughout all of spring camp despite splitting first-team reps with graduate transfer Austin Appleby.

The 6-1, 211-pound Del Rio, who came to UF from Oregon State via Alabama, shined in the Gators’ annual spring scrimmage, completing 10 of his 11 passes for 176 yards and two passing touchdowns.

Despite Del Rio’s success in the spring and through the early part of fall camp, McElwain kept the competition open, with Appleby and true freshmen Feleipe Franks and Kyle Trask also in the mix.

But in the end, it was Del Rio who took charge.