Florida's chances against Michigan in its season opener on Saturday took another hit Wednesday when the team announced junior Jordan Scarlett and redshirt freshman Rick Wells are suspended for the game.

"Head Coach Jim McElwain has announced that Jordan Scarlett and Rick Wells are suspended from all team activities," the team wrote on Twitter.

That brings Florida's total suspension list up to 10. Seven players were suspended for alleged misuse of school funds earlier this month, receiver James Robinson was suspended for a marijuana citation last week and now Scarlett and Wells are suspended for unknown reasons.

The latest round of suspensions is a significant blow to the Gators at running back, where Scarlett led the team with 889 yards and six touchdowns a season ago. On Tuesday, he reiterated his goal for this season is to rush for 1,000 yards. He was also atop the team's depth chart.

McElwain is expected to speak with reporters around 5:20 Thursday afternoon.

Pair of Florida freshmen cited for marijuana possession per report

The story cites a UF Police Department report that details a resident assistant smelling marijuana from outside the apartment shared by Miller and Robinson just past midnight on Monday morning. The RA called police, who knocked and found the smell coming from Robinson's room. They then found two small bags of marijuana, and both Miller and Robinson admitted to owning one, per the report.

The Herald confirmed there was a narcotics violation at Keys Residential Complex on Monday around that time, but a request for the incident report is pending.

Before this incident, both freshmen had already been in trouble with off-field incidents either during or before their Florida careers began.

Miller was one of seven players suspended from practice and next Saturday's season opener for reportedly misusing school funds, and Robinson was cited for marijuana as a high school senior while on a visit to Ohio State. He also wasn't expected to be allowed to enroll at Florida until coach Jim McElwain stepped in and vouched for him to be given a second chance.

"I feel it’s my responsibility to give guys a chance," McElwain said on Aug. 7 when asked about vouching for Robinson. "I never will throw somebody out that has something too him and gets an opportunity to be successful.”

Robinson was at practice on Tuesday and Wednesday, while Miller is still suspended for the previous incident.

Through a spokesman, the school released a statement Thursday afternoon.

"Coach McElwain is aware and it has been dealt with," it read.

Offensive tackle Jean Delance has decided to transfer from Texas to Florida after a season with the Longhorns. He announced his decision on Twitter Monday afternoon.

With Texas, Delance played in two games as a freshman and went through spring camp before announcing his intention to transfer last week. He will have to sit out the 2017 season per NCAA transfer rules.

Delance was a four-star recruit rated No. 123 in the country by the 247Sports Composite as a high school senior in 2016. Although he won't be playing this season, he will provide Florida's offensive line with some depth at practice.

The Florida Gators are ranked 17th in 2017's first AP poll, which was released Monday at noon.

Miami (No. 18) and South Florida (No. 19) were the other Florida teams ranked in the poll.

The ranking was a downgrade for the Gators, who were ranked No. 16 in the preseason Coaches Poll.

“We did open a criminal investigation involving Mr. Smith yesterday," he wrote in an email, "that has been forwarded to our detective division for followup."

He didn't provide any details as to the nature of the investigation, although he did add that no other players "have been identified as being involved at this point."

He also said he has "no clue" how long how long the followup will take.

“I haven’t gotten anything from the authorities,” coach Jim McElwain said Friday when asked about Smith. “Like I said, until it’s resolved that’s the way it is." 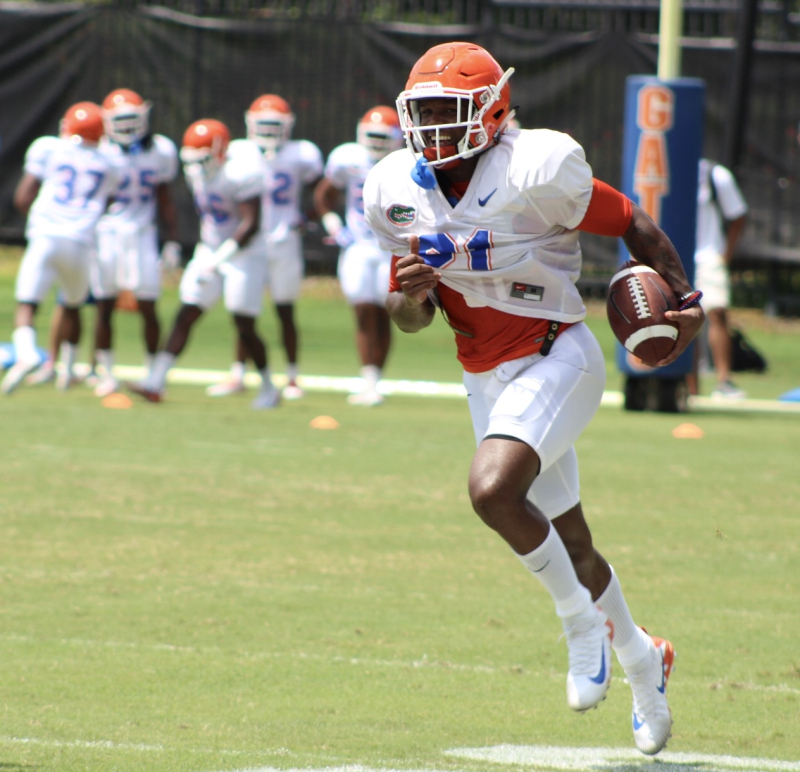 Antonio Callaway runs with the ball during practice on Aug. 10, 2017 at Donald R. Dizney Stadium.

Florida will be without star receiver Antonio Callaway and six other players when it opens the season against Michigan on Sept. 2.

“We have a small group of players that have made some choices that are extremely disappointing," coach Jim McElwain wrote in a release. "Action has been taken. They have missed some practice and will miss the Michigan game. We will use this as a learning opportunity and we will have some players step up as we move forward.”

The suspensions leave the Gators thin at linebacker and defensive tackle ahead of the week one showdown with the Wolverines in Arlington, Texas. They're also another blow to Callaway, who's gotten in off-the-field trouble before. The junior from Miami faced internal discipline for a marijuana citation in May that resulted in him pleading no contest to possession of drug paraphernalia. He was also investigated for a sexual assault and admitted he was high on marijuana when the assault took place, though he was later found not responsible.

Callaway was Florida's top receiver the last two seasons, including 721 yards and three touchdowns in 2016.

Gators playing scrimmage in The Swamp Friday, plus other notes 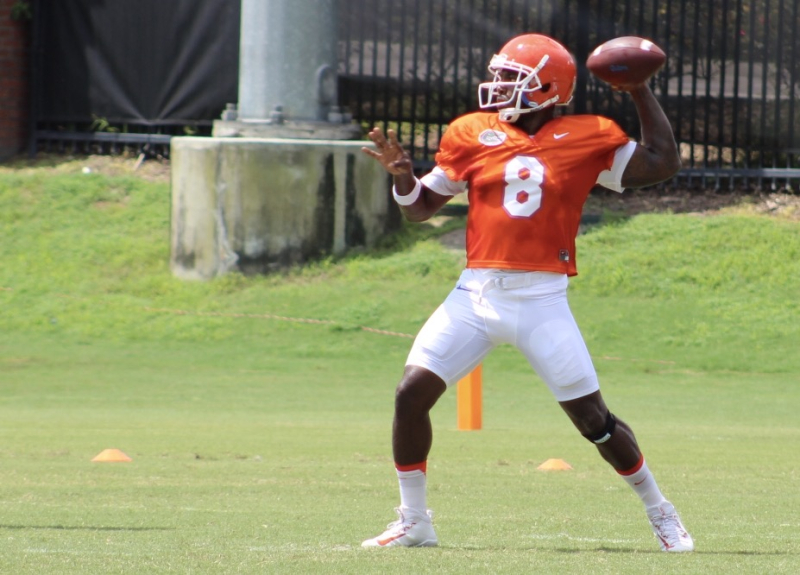 Jim McElwain has emphasized competition throughout preseason camp, and on Friday he'll get his first chance to see it play out in The Swamp.

He's expecting to run somewhere from 90 to 110 plays with special emphasis on end-of-game, end-of-half and overtime situations. He also said he plans to work on substitution packages.

One thing he’s especially excited about is watching the quarterbacks play in Ben Hill Griffin Stadium, even though the seats will be empty. McElwain said the introduction of graduate transfer Malik Zaire has intensified the competition more than he was expecting, and he’s expecting that to continue in the scrimmage.

“There should be some answers, I think,” McElwain said of the scrimmage providing clues as to who will be the team’s starting quarterback. “And yet I don't know that. If I had a crystal ball I probably wouldn't be doing what I'm doing.”

He added one of the main purposes of the scrimmage is to evaluate some of the fringe players — freshmen, walk-ons, etc. He said he looks at the scrimmage like a tryout. He wants his players to find roles, whether at positions or on special teams.

“This is their opportunity to make the team,” he said. “I'm really looking forward to seeing where they and how they compete to go get a job.”

Running back Lamical Perine also said he’s excited to see what some of the fringe players do on the bigger stage.

“Some players, they shine under the lights,” he said. “We'll see who the players are."

After missing time earlier this week with some knee swelling, left tackle Martez Ivey is doing fine and is at nearly full strength, McElwain said Friday.

Tight end C’yontai Lewis, defensive tackle Elijah Conliffe, offensive tackle Kadeem Telfort, defensive back CJ McWilliams, safety Quincy Lenton, linebacker Kylan Johnson and defensive end Jordan Sherit, meanwhile, will all be out of for the scrimmage. McElwain didn’t elaborate on any of their injuries, but it sounded precautionary.

“Don’t read anything into it,” he said.

Will the real Wanny please stand up

Florida features two players with the same name: safety Jeawon Taylor and offensive lineman Jawaan Taylor. Coaches have taken to calling both of them Wanny, which has led to some confusion.

“When they call Wanny,” Jawaan said, “we both look because we don't know which one they're talking about. So they've gotta add either big Wanny or little Wanny just so we can know.”

He added that in addition to their size separation — Jawaan is listed at 6-foot-5 and 334 pounds while Jeawon is 6-feet, 206 pounds — they’re also differentiated by personality. He said he’s more the quiet type while Jeawon is loud and makes people laugh.

“Ever since he started getting called it, he thinks he's the real Wanny and all that,” Jawaan said. “So it's just fun.”

The confusion figures to get worse next season, as Florida currently holds a commitment from linebacker recruit David Reese. If he enrolls, he’ll join current UF linebacker David Reese.

Running back Jordan Scarlett said Bryan, a redshirt junior from Casper, Wyoming, squats the second-most weight on the team, and defensive end Keivonnis Davis said he’s just as impressive elsewhere in the gym.

“Squat, bench, curl, whatever it is,” he said. “That man is a beast. I’m telling you that man is a beast, like a real life beast. I tried working out with him over the summer but I was sore the next day. He’s a monster.”

Perine added “he could lift the whole weight room if he wanted to."

Offensive lineman Brett Heggie said that translates well to the field, where Bryan’s strength makes him hard to block.

McElwain singled out Bryan as a player who needs to step up this season, especially with the Gators lacking depth at defensive tackle. He said it was Bryan’s “time.”

“I feel like he's going to shock a lot of people this year,” he said. “He's very underrated.”

Florida’s assistant coaches will all be making more money in the coming seasons. Through a public records request, the school made their contract details available on Friday.

Offensive coordinator Doug Nussmeier will jump from making $540,000 last season to making $832,725 the next two seasons. The considerable raise comes after Nussmeier received his second $300,000 payment from his former employer, Michigan, last season. The payment resulted from Nussmeier's contract being bought out when Wolverines head coach Brady Hoke was fired in December 2014. The two-year extension runs through the 2018 season.

All assistant coaches also make $10,000 per year from the school’s apparel contract with Nike.

In late july, the school also announced the contract details for its other assistant coaches. Randy Shannon, the former head coach at the University of Miami who was named Florida’s defensive coordinator after coaching its linebackers the past two seasons, made a considerable jump in his new role from $490,000 to $890,000.