Gators on the verge of playing themselves out of the tournament

After three straight losses, the Gators are no longer a consensus NCAA Tournament team, per the omnipotent Bracket Matrix.

Saturday’s 96-91 loss at LSU was yet another blow to UF’s postseason hopes, capping a month of missed opportunities. The Gators, who’s RPI dropped 13 spots to No. 45, have lost five of seven and won just three games in February.

ESPN now lists Florida among its “Last Four In,” while CBS groups the Gators in the “First Four Out” category.

Florida hosts No. 22 Kentucky on Tuesday night in desperate need of a victory. The showdown against the Wildcats also marks the final game in the O’Connell Center before the facility’s $65 million renovation gets underway.

“We’ve squandered some opportunities and this is one of the last few we’ll have,” first-year coach Mike White said.

“Obviously, this is a big, big opportunity for our guys to overcome some mistakes and failures. It will be a very, very difficult game to win, but if we play well -- we’re at home -- we should have our chances.”

Florida’s tailspin actually started in Lexington during a 80-61 loss to Kentucky on Feb. 6. The Gators were lit up for 35 points by ‘Cats freshman Jamal Murray, and their once-stingy defense hasn’t been the same since.

After ranking among the Top 10 nationally in defensive efficiency for the first three months of the season, Florida has been torched in the last month, allowing 70-plus points six times -- including four games over 80 points.

“Our emphasis probably moved toward offense too much [lately],” White said, adding that UF held a defense-only practice Monday.

“We’ve spent an inordinate amount of time shooting free throws, running dry offense by shooting a ton of jump shots, individual skill development. … It’s always a balancing act, and we’ve got to be back to defending at a high level to give ourselves a chance.”

As it stands, Florida (17-11, 8-8) is grouped in a five-way tie for sixth place in the SEC. To make the NCAA Tournament, the Gators likely need to beat Kentucky and Missouri in the regular-season finale. Otherwise, UF may have to make a deep run -- or perhaps win -- the SEC Tournament in Nashville, Tennessee to even reach the NCAA’s.

In recent weeks, Gators left guard Max Garcia has been singled out as Florida's most consistent offensive lineman by coach Will Muschamp.

After sitting out a season due to NCAA transfer rules, the former Maryland guard had an up-and-down first two games before really settling in the win over Tennessee.

The junior spoke about how the game has slowed down for him, the offensive line's performance against Arkansas, the team's recent offensive continuity and the looming trip to LSU.

Posted by Jesse Simonton at 8:31 PM in Food and Drink | Permalink | Comments

To redshirt or not to redshirt?

Florida’s five-star freshman tailback -- one of the most ballyhooed running back recruits in Florida history and the state’s all-time leading rusher -- has just one more carry than his retired dad, Fred, since Florida’s season opener.

Against Toledo on Aug. 31, Taylor carried the ball five times for 43 yards on Florida’s final possession in a 24-6 victory. The Swamp went bananas. The Gator Nation was positive the brief cameo was merely a tease of the future.

Perhaps it will be, but maybe the distant future. 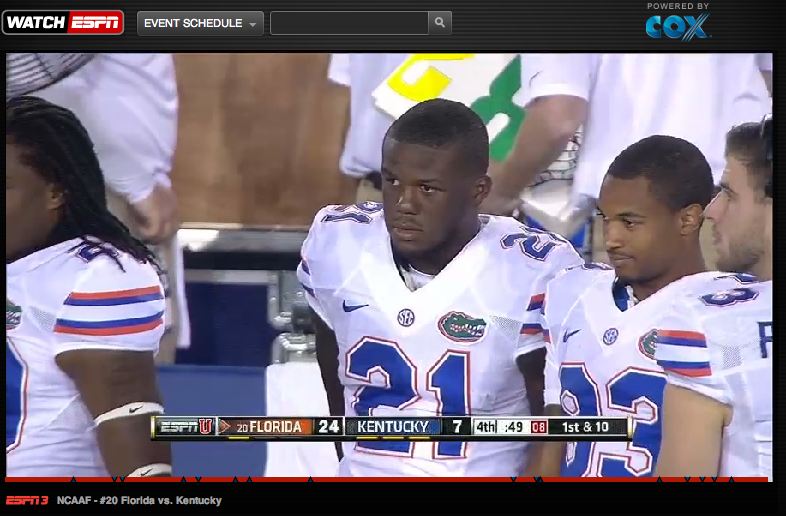 Taylor has tallied just a single carry in Florida’s last three games -- a ho-hum three-yard run against Tennessee. As I joked in the UF-UT retro diary, the crowd roared in adulation for the most mundane of plays. Gators fans love them some Kelvin Taylor -- perhaps irrationally so right now.

Taylor’s path to the present has been well documented.

An early enrollee in January, Taylor had an excellent spring camp, before hitting the proverbial freshman wall in August. He struggled through a frustrating training camp, plagued by issues with ball security, pass protection and playbook knowledge.

When the 2013 season kicked off, Taylor was buried on the depth chart behind Matt Jones, Mack Brown, Mr. Red Herring Mark Herndon and Valdez Showers.

But then the Toledo performance happened -- albeit versus an undersized and gassed front -- and Taylor’s role seemed to be reevaluated.

Following his strong debut Muschamp said the following about his freshman tailback:

“I think his role will continue to develop through the season. We’ll see how much as we move forward. He’s a natural runner, he has really good vision. He has to continue to do some of the other things you have to do at the position. But he’s a guy we’re excited about, no question.”

And yet, the praise for Taylor continues.

UF offensive coordinator Brent Pease -- before the Tennessee game -- “Kelvin has done a lot better in practice. He’s hitting that flow like Matt [Jones] did last year when Matt started showing up and doing good things in practice and he started taking off. Kelvin is starting to hit that.”

Pease -- after the Kentucky game -- “He’s still in the mix. We want to get him in there. I think coach [Brian] White has a good feel on how he controls those guys and how the game flow is going and where we’ve got to pick our spots. It’s hard with one ball, three players. They’re all capable. They’re all very good. A couple of them have experience. We spot guys in certain packages to use at certain times. We’ve got to continue. The good thing about it is they’ve all been very unselfish and they’ve all grown and continued to practice real well.”

Hollow words? Classic coach speak? When asked if Taylor was once again a redshirt candidate, Pease emphatically stated: “No.”

But the “one ball, three players” thing gets extra tricky when you include Valdez Showers -- who returns Saturday against Arkansas after missing Florida’s previous two games -- into the mix as well.

Before Jones’ exposition against Kentucky (career-high 176 yards and touchdown), Muschamp stated repeatedly the Gators would go with a “hot hand” approach at tailback.

Loosely translated: If not Jones then Mack Brown.

Taylor’s preseason fumblitis was certainly a cause for concern -- especially coupled with Jones’ own early season ball security issues -- but there’s been no indication Taylor is still struggling in practice. It appears, he's simply not ready to play in the SEC.

Said Jones: “He has a great work ethic. Sometimes when you don’t get in as a freshman it is kind of hard of you coming from high school, like I was last year. I was kind of the same way, like why wasn’t I getting in. But sometimes, you’re not ready for the SEC or whatever. I think he’s ready. It’s not my decision. But his demeanor is great in practice.”

Jones does know what Taylor feels like, but I’m not sure his freshman season is a comparable litmus test. In 2012, UF’s staff practically begged Jones to topple Brown for the backup job. Ultimately, he did.

This year, Taylor is in no position to leapfrog Jones or Brown. And now this week, he’s again battling Showers for third-string reps.

To redshirt or not to redshirt?

Most signs point to one direction.

GAINESVILLE -- I woke up this morning like I was 10 years old and it was Christmas Day. Oh, boy, look what Gator Claus left me under the cypress tree! A shiny new college football season!

Not even a right cross from LeGarrette Blount could keep me away from the television/computer today. College football is finally here. (We'll give the sport we love TWO mulligans after Thursday's doubleheader debacle.)

OK, let's be serious. Did anyone other than me scream "Down goes the champ!" when Blount -- the pride of Madison County, Fla. -- dropped that Boise State lineman? I didn't see it live but that was my first reaction the next morning. Should Blount have been suspended for an entire season? Probably. After all, he possibly could have gone to a Utah jail for longer if Don Flamenco would have pressed charges.

The Gators don't play until 7 p.m. I'm not really feeling a season opener against Charleston Southern, so here's a link to the game notes if you want to study up on the Buccaneers.

Here's a link to a couple of feature stories I wrote this week about the season opener, enjoy ... Maturity pays off for Brandon James... Florida Gators opener an opportunity to tinker with offense... Brandon Spikes is the Predator!

Florida State 31, Miami 27: Evenly matched teams except for one noticeable difference: Florida State QB Christian Ponder is a veteran playing behind a talented offensive line while Canes QB Jacory Harris is making his first start at The Doak. Hey, Jacory, how’s your play-action fake coming along? We’ll find out on Monday. (Favorite: FSU by 6.)

Florida 63, Charleston Southern 0: The Gators should be ashamed of themselves. (Favorite: No line.)

Nebraska 45, Florida Atlantic 24: Owls QB Rusty Smith will have a fine senior season but he must first endure an FAU payday at Nebraska’s Memorial Stadium. Coach Howard Schnellenberger, who coached at Oklahoma in 1995, did FAU no favors by torching Nebraska’s logo during a team bonfire this week. (Favorite: Nebraska by 23.)

South Florida 42, Wofford 10: No contest here. This is the first of three tune-up games for the Bulls before they play at Florida State on Sept. 26. (Favorite: No line.)

Georgia 27, Oklahoma State 24: Upset special. The Bulldogs will win this game on the offensive and defensive lines. Expect a big day from Georgia receiver A.J. Green, who will be the best playmaker on the field. Sorry, Dez Bryant. (Favorite: Oklahoma State by 5.)

Notre Dame 30, Nevada 14: A statement game for the Fighting Irish. [Pause for contemplation.] Irish QB Jimmy Clausen has matured into a leader and was named a team captain this preseason. Behind a veteran line, Clausen will begin leading Notre Dame back to respectable this Saturday. (Favorite: Notre Dame by 14 ½).

Oklahoma 40, BYU 17: This is a bad match-up for Brigham Young, which should rebound after this week to contend for the Mountain West Conference championship. The Sooners, losers to Florida in last season’s title game, get back on track with the return of running back DeMarco Murray. (Favorite: Oklahoma by 22 ½.)

Alabama 20, Virginia Tech 13: The second straight season opener for Alabama at the Georgia Dome. This is basically a home game for the Crimson Tide, which has one of the best defenses in the nation. Virginia Tech is shaky at quarterback and thin at running back. (Favorite: Alabama by 6.)

Posted by jgoodman at 9:57 AM in Food and Drink | Permalink | Comments

The Gator Club of Miami will meet on Friday in Coral Gables at Sports Exchange for the "Gator Miami Happy Hour of the Year!"

This is a big deal, folks. It's THE place to be from 5:30-8 p.m. Drinks are two-for-one. Same goes for appetizers and pizzas. Where else in Miami can you get a deal like that? After happy hour, who knows? Maybe you'll get lucky like back in your good ol' college days.

Here's the website to Sports Exchange. LINK! The address is 45 Miracle Mile in Coral Gables. While you're there, openly taunt the 'Canes and flaunt the Gators' preseason No.1 ranking.

Posted by jgoodman at 11:18 PM in Food and Drink | Permalink | Comments