There was an unsubstantiated rumor circulating through my head last night that the University of Florida was giving away free three-ounce bottles of hair gel tonight at the men's basketball game. The touching sentiment was to honor UF's two greatest athletes (of the popular sports), Tim Tebow and Nick Calathes. Those rumors turned out to be false this morning when I awoke. Sorry to get everyone's hopes up. Instead, guard Walter Hodge will just shave the names 'Tebow' and 'Calathes' into the sides of his head to honor a contract between ESPN and the University of Florida. (At least one Tebow reference in every broadcast.) Hodge enjoys an alphabetic shave every now and then. For instance, if you combine selective letters from 'Tebow' and 'Calathes,' here's what you get: 'what Table,' 'Calathes bet' and 'These blow.' I watched The Princess Bride last night on cable television. Classic movie. While walking through the Fire Swamp, Buttercup reminds Westley of the 'R.O.U.S.' lurking about. It reminded me of Joe Haden. After all, Haden does have a tattoo of Mighty Mouse on his arm. Indeed, there is a basketball game tonight.

GAINESVILLE -- Three storylines you need to know before you watch the game (UF vs. South Carolina) at 9 p.m. on ESPN:

3. Suddenly, but not without warning, South Carolina is pretty good. Florida (18-4, 5-2 in SEC), South Carolina (16-4, 5-2) and Kentucky (16-6, 5-2) are tied for first place in the SEC East. South Carolina defeated Kentucky 78-77 on Saturday and has won four straight since edging the Gators 70-69 in Columbia, S.C. The Gamecocks' guards have been carrying the team. One of those players has a great name, Zam Fredrick. He scored 24 points in the win against Kentucky. The other guy to watch is Devan Downey. His name might imply softness, but do not be fooled. Downey leads the Gamecocks in scoring (19.8 p.p.g.) Not bad for a guy that's listed at 5-9.

2. Tennessee exposed Florida's many weaknesses on Saturday. The Vols won 79-63. Those weaknesses include but are not limited to: 1. A team that loses its shape when Calathes gets into foul trouble and goes to the bench. 2. A back-up point guard who is still figuring things out. By things, we mean when to shoot and when to pass. 3. A defense that lacks the athletes to play straight man-to-man defense. 4. No size on the block. 5. A senior shooting guard searching for his shot. One can only guess which deficiency South Carolina will try and exploit tonight.

1. Calathes had a triple-double in his last home game. Can he do it again? By the way, Calathes apparently was offered a pro contract by a lower-tier Greek team this summer while trying out for the Greek National team. Calathes told reporters as much on Monday. Isn't Calathes an American citizen, you ask? Why is he trying out for the Greek team? Calathes' grandfather was Greek. Like most Greeks, he moved to Florida. Since most Greeks live in Florida these days, the old country now considers Florida a Greek city-state.

Posted by jgoodman at 10:39 AM in Florida Gators, Nick Calathes | Permalink | Comments

Robinson has been offered a scholarship by Florida and he would likely be converted to a defensive back if he committed to the Gators.

Meyer arrived near the end of the first half, according to Miami Herald writer Bob Emanuel Jr., and stood on the St. Thomas sideline. Florida's coach has built a pipeline of sorts from St. Thomas to UF. Redshirt sophomore offensive lineman Marcus Gilbert and sophomore free safety Major Wright are St. Thomas grads.

Calathes injured his hip several weeks ago during a training drill. Florida coach Billy Donovan said on Wednesday that Calathes could be limited for as many as three weeks.

That's all I've got today. In Birmingham, Ala., this weekend visiting family. Attending a Hoover Bucs youth football game on Saturday. Just had Thai food in Montgomery, Ala. This was a bad idea.

GAINESVILLE -- Gator Clause caught up with Florida assistant basketball coach Shaka Smart on Tuesday. Smart, formerly of Clemson, was hired on Monday and made the rounds on Tuesday, speaking with reporters and radio stations in Gainesville.

Smart replaces Lewis Preston on coach Billy Donovan's staff. Only 31 years old, Smart is considered one of the profession's rising stars. Such a thorough interview might seem a little excessive for an assistant coach, but Gator Clause wanted to give readers a closer look at a young college basketball coach who has the potential to be one of the biggest names in college hoops. Smart is Donovan's third assistant behind Larry Shyatt and Rob Lanier. 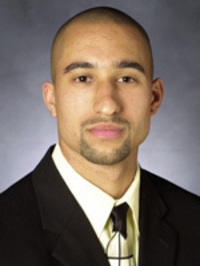 GATOR CLAUSE: It has been a quick and steady climb up the ranks for you as a coach. What is your greatest asset?

SMART: I would say my willingness to work extremely hard and to learn.

GC: What was your connection to Florida before being hired by Coach Donovan?

SMART: Probably the biggest thing I learned is that the more you learn the more you realize there is so much more to learn. As a kid out of high school, you feel like you’re on top of the world and you know it all. But all the things you gain as you become an adult teaches you that there’s a lot more out there you need to learn.

GC: For all the youngsters out there who think they’re going to be the next Michael Jordan, how did academics get you to where you are today?

SMART: Well, I’m one of those guys who is reading about three books at one time. So, I would say the last full book I finished was called The Power of Intention by Dr. Wayne W. Dyer. His basic premise is if you decide what you want in your life and you place everything in line with that goal, then it’s going to work out for you.

GC: Do college basketball student-athletes play too many video games?

SMART: [Laughs] It seems to be the thing to do. I learned a while back in recruiting that it’s not good to fight the guys on that one. If you can’t beat them, join them. I never was really good at video games but when kids come on campus and they want to play some video games with the players then I’m all about it. For some guys, that’s their way to get to know guys in a relaxed environment.

GC: Shaka Smart is a name easily remembered. Is there a story behind that handle?

SMART: It’s an African name. There was a man named Shaka who united a large group of people in southern Africa, so my father decided to name me after him.

GC: Greatest moment on the court as a player?

SMART: I wasn’t the best player in the world but I just loved playing the game. I was one of those guys who would just be on the court forever if you let them. But the biggest thing for me was helping my teammates, so one game in high school I had 20 assists in one game. So, that worked out well for us.

GC: Being an assist man yourself, what’s the best assist you could pass off to Nick Calathes in your first month on the job?

SMART: Nick had an extremely successful freshman year, so the best thing I can say to him and any of the freshmen is that the biggest jump you should make in college is from your freshman to sophomore years because now you have a year under you, you understand the way the SEC works, you understand college basketball at the highest level. So, if you’re willing to do the things you need to do over the summer to better your game and improve your body then you’re putting yourself into position to improve your body.

GC: Can you please teach him how to dunk?

SMART: Last time I checked a dunk is only worth two points.

GC: Greatest moment on the court as a coach?

SMART: We beat Duke last March in the ACC Tournament. Clemson hadn’t been to the ACC championship since 1962 and we beat Duke in the ACC semifinals to get to the championship game and that really validated a lot of things for us and what we were doing at Clemson.

GC: Worst moment on the court as a coach?

SMART: You remember the bad moments, too. One story that is significant to our staff here: While I was at Clemson we played Virginia and Rob Lanier was on staff there. Virginia had two really good guards that year. We were up by 15 points with four minutes left — maybe five — at home and they came back and beat us. That might have been the lowest I felt as a coach because when you’re up that much as a coach you feel like we need to bring this one home.

SMART: Never. I know my role as an assistant coach, and it’s not my role to voice my opinions with a ref.

GC: I’m leaning toward going to Miami to be a shooting guard. Sell me on the Gators.

SMART: Billy Donovan. We got the best coach in the country and we have an unbelievable fan base and coach Donovan is going to let you play. He really does a good job of letting people do what they do best on the court. So this is a place you can come and thrive.

GC: I’m leaning toward going to Clemson to be a shooting guard. Sell me on the Gators.

SMART: That would be a tough one because anytime you leave a place you certainly want to leave on good terms and leave with a strong relationship with the people you just left. But Florida is the place to be for the same reasons I just gave you. It doesn’t really matter whom we’re recruiting against. Those things aren’t going to change. I don’t believe in negative recruiting. I firmly believe in showing a kid why the University of Florida is the best fit in the country for that young man.

GC: Do you plan to keep open lines of communication with recruiting contacts you made while at Clemson?

SMART: Of course. You have to do that. You want to take advantage of any contacts you have. There are still contacts I have from when I was a Division II coach. All of sudden an AAU coach has a high-level player. That’s one of the things you do as you go in this business: Just build more and more contacts. Plus, when you go to new jobs you have to branch out and be willing to make connections and build relationship with new people.

GC: Everyone in your profession has a mentor. Who was your mentor off the court?

SMART: Probably Bill Brown, who recruited me to play at Kenyon College and then left after my freshman year. It broke my heart but I forgave him and actually went to work for him right out of college at a school called California University of Pennsylvania. He’s a person who taught me a great deal about life and basketball but mostly importantly about treating people the right way. I still speak to him about every week.

SMART: There are three reasons I wanted to come to Florida. One, I wanted to be a part of a basketball program that has done tremendous things in the recent past and also has aspirations to do more tremendous things in the future. The second reason is to be around a great group of people. The vibe on this staff and team draws you to it. The third reason I came is the opportunity to learn a great deal while I’m here but also contribute and help this team win as many games as possible and find as much success as we can.