Northwestern, Central among field of 12 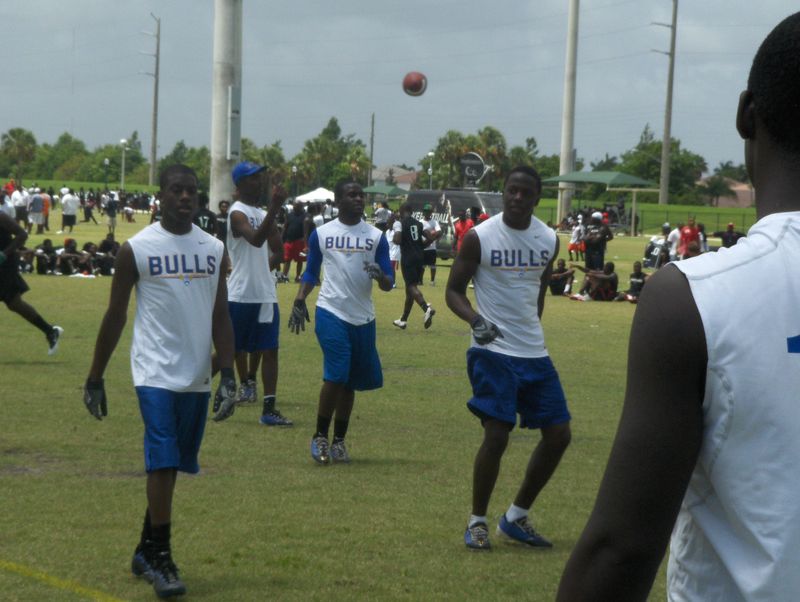 When the Nike’s 7-on-7 South Florida tournament was planned a few months back, there was plenty of anticipation of having two of the better teams in the state (Northwestern and Central) on hand for the event at Miramar Regional Park on Saturday.

By the end of the qualifier, both teams had advanced to the round of 12 on July 17 at a site to be determined, and if you asked anyone to separate the two Miami-Dade football giants, it would have been as difficult as the Bulls 33-32 win over the Rockets.

The two teams, with just about every top player on hand, drew much of the attention during the day-long event that attracted 30 of the top teams in the two counties - with a special appearance by former Nova High and NFL running back, Autry Denson, who brought his Boca Raton Pope John Paul II team down.

Make no mistake about this quality event, there were high profile athletes in every direction, and while much of the attention was being paid to Northwestern quarterback Teddy Bridgewater and many of the Central standouts, athletes were showing just why many are so coveted.

With the four qualifiers from the Palm Beach event (Jupiter Christian, Delray Beach Atlantic, Miami Christopher Columbus and Flanagan, which was voted into the field of 12), the tournament is set, and things should be very exciting when all get together.

Broward powers Deerfield Beach and Blanche Ely advanced along with Boyd Anderson and Miramar Everglades, which was the “home” team for this event, which was held less than a mile from the school.

Miami-Dade will send Northwestern and Central, but also will add very athletic and up-and-coming programs Norland and Jackson to the list of 12 who will be back to crown a championship.

GAME NOTES
Avery Johnson, Ely’s 2012 receiver, was chosen as the second best prospect in the class by Friday Night Football Magazine - Florida. He was very impressive…

Coach Dameon Jones and Hallandale appears to be back on track. The Chargers have enough talent to compete for a playoff spot…

As many concede Northwestern and Central playoff spots in the district, it may be wise to understand that Hialeah is stacked with talent, including the best overall high school running back in the state, Jerron Seymour, junior linebacker Andy Garcia and sophomore linebacker George Williams - to name a few…

Homestead is easily one of the most talent-rich programs around with players such as Rico Williams, who is as impressive as any athlete at the event..

Carol City is showing that even though they lost a number of quality athletes, the Chiefs are stacked and ready to defend their district title…

Remember, we talked about some of those gifted Class of 2014 getting ready to enter high school. On Saturday, two of those emerging stars were in action with Jackson quarterback (Quinton Flowers) and Central running back Joseph Yearby showcasing their skills. Chaminade-Madonna, which did not take part in this event, had quarterback Shaun White and running back/defensive back Cameron Rigby on hand watching.

There were a number of players at the event, we will continue to use them in our BLOGS and Herald Spotlight.