When I asked Ermon Lane if there were other schools beside Florida State in contention for his services, we both shared a laugh after he insisted so on Thursday.

“It’s a possibility I might go to Florida State, but other schools recruiting me hard,” said Lane, who tried to keep a straight face while listing Miami, Alabama and Florida after taking photos to commemorate his Miami Herald First-Team All-Dade honors. 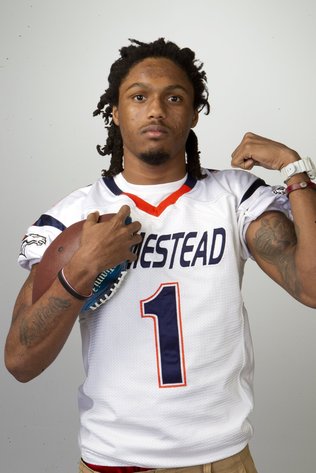 Lane, the Homestead wide receiver who decommitted from UF on Jan. 10, said he’s going to wait until National Signing Day on Feb. 5 to announce his commitment – with all signs pointing to FSU – and not during his official visit to Tallahassee on Jan. 31. He met with members of the Seminoles coaching staff at his school and at home on Thursday, and has no plans at this time to meet with any other coaching staff members from any other school.

After playing in the Under Armour All-America Game on Jan. 2, Lane has also celebrated making the honor roll in recent weeks. Since decommitting, however, he has felt the brunt from fans across several fan bases on Twitter and admitted it has affected him “deep down inside.”

“After I decommitted, it was getting tough,” said Lane, rated the second best wide receiver in the country in the Class of 2014 by ESPN. “All the fans coming at me. It wasn’t really stopping me from doing what I gotta do, but it was just popping up in my phone every day back-to back.

“It was getting aggravating a little bit.”

Homestead coach Larry Coffey said Lane “has been strong on Florida the whole time” this season as the Gators suffered their first losing campaign since 1979 and saw the Seminoles win the national championship on Jan. 6. The Gators also lost out on another South Florida prospect as Planation’s Chris Lammons decommitted from UF on Jan. 9.

“I think the situation at Florida is kind of volatile, and I think those kids are looking at that situation as not as stable,” Coffey said, with the Gators recently hiring Kurt Roper from Duke to serve as their offensive coordinator. “Nobody really knows how quick that transition is going to take place.”

Coffey said with the changes at UF, the Gators staff has to “do a good job of reassuring the kids that they had committed that [UF] is going to be a good situation for them going forward.”

“Being in a comfortable environment with people you know and trust is always a factor in a decision for people in general,” Coffey said. “That will probably have some say, but to say he’s going to go to Florida State – maybe he will, maybe he won’t.”