Shawn Burgess-Becker and Calvin Ridley have been close friends since the third grade.

On Sunday, they plan on announcing their college decisions to keep their friendship going at the same college. 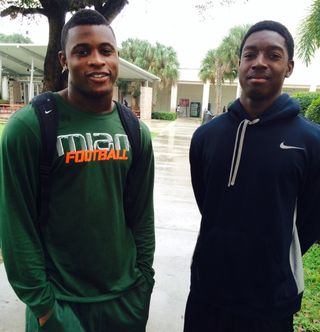 Burgess-Becker (left) and Ridley – two of South Florida’s most talented Class of 2015 prospects – took to their Twitter accounts Thursday to post a list of top schools with Miami, Alabama, Florida State and Ohio State in common. Burgess-Becker also listed UCF and Florida among his possible suitors with Ridley adding Clemson.

“I’ve visited most of the colleges [on my list],” Burgess-Becker said at Monarch High School on Thursday afternoon. “All of the schools have beautiful campuses. All of those schools have just been recruiting me heavy.

“I just felt good to make my decision on Sunday.”

Added Ridley, a young man of few words: “I’ve been known what school I wanted to go to.”

Burgess-Becker, rated a four-star safety by 247 Sports with five-star potential, said he was thinking of announcing his college destination after his time visiting UM during the Hurricanes’ junior day event this past Sunday.

“They formed a relationship with quite a few of those guys,” Monarch coach Calvin Davis said, “and I think either one of [the coaches] could get them to commit.”

Of the four schools in common, Ridley – rated a four-star wide receiver, also capable of a fifth star – said he likes UM, Alabama and Ohio State the most after visiting each campus.

Along with comfort, Davis said the school’s tradition and university as whole were important factors for both players.

“They kinda have an idea of what they’re looking for,” Davis said. “They decided they wanted to go ahead and let the schools know so they can focus on academics and try to get it out of the way.

“I think they’re both straddling the fence a little bit, but I’m sure by Sunday they’ll both be 100 percent sure on where they want to go.”