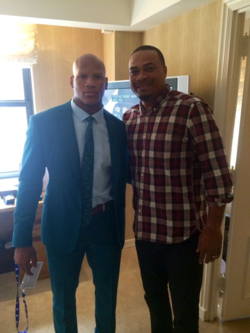 It's not often that a high school coach gets the chance to travel up to New York City and watch one of his former players get taken in the first round of the NFL Draft.

So Plantation High coach Steve Davis made sure to soak the experience all in on Thursday night.

Ryan Shazier, whom Davis coached for four years at Plantation and grew into an All-American linebacker at Ohio State, was taken with the 15th overall pick by the Pittsburgh Steelers on Thursday. It's the first player Davis has ever coached to go in the first round.

Shazier, a 6-1, 237-pound athletic freak who ran the 40-yard dash in 4.3 seconds at the NFL combine, also became the first Broward County player to be taken in the first round since the Arizona Cardinals drafted former Pompano Beach Ely cornerback Patrick Petersen with the fifth pick in the 2011 draft.

"It was an awesome experience," said Davis, who said he got a chance to hug Shazier -- along with 15 family members -- shortly after he stepped off stage with NFL Commissioner Roger Goodell.

"The funny thing about it was Pittsburgh was real quiet throughout the whole process. They didn't call his agent. If they didn't take him the Dallas Cowboys were on the phone with his agent saying they were going to take him at 16. It was exciting and a great moment."

Shazier grew up the son of a pastor -- and not just any pastor. Vernon Shazier is the team chaplain for the Miami Dolphins and a motivational speaker for the team. Davis said both of Shazier's parents did a tremendous job raising him especially as he struggled growing up battling Alopecia, a condition in which hair is lost from some or all areas of the body.

"It was rough for him as a child," Davis said. "It wasn't cool to be a bald headed guy when you're a little guy. His hair was in patches. He developed a rough exterior, but always had a great heart. And now he's grown into a young man who wants to help other people."

Davis, who had former Plantation players Brandon McGee (2013, 5th round) and Josh Robinson (2012, 3rd round) taken in the previous two drafts, said he knew Shazier was going to be a special talent since his freshman year at Plantation.

"He was on JV and they were playing Boyd Anderson. Ryan sacked the quarterback, picked up the fumble and ran it in for a touchdown," Davis said. "The funny thing was right before he got over the goalline he held it up to celebrate and the ball slipped out of his hands. That was like a life lesson. He said he never did that again. But you could see the ability."

Somehow, the hometown Miami Hurricanes didn't. Davis said Shazier never got an offer from Randy Shannon's coaching staff before he was fired on the final day of the 2010 season. Davis said it was tough for him to stomach especially since UM had recruited McGee from him the year before.

"I hate to share that because how I feel about UM and they're the hometown team, but it was a head scratcher," Davis said. "Ryan had offers on the table from Alabama, LSU and was committed to Florida before Urban Meyer left. Miami had been recruiting him since his sophomore year. Other teams saw what freakish ability he had and that he was going to be a linebacker. Everybody else knew they would have to coach him up. That's why you coach."

Davis said the day after Al Golden got the job at Miami he called to offer Shazier a scholarship. But it was too late. Shazier was already on his way to Columbus, Ohio to play for Jim Tressel.

"I look at it like all things happen for a reason. Ryan led the Big Ten in tackles two years in a row," Davis said. "People make mistakes. That's one unfortunately they made."