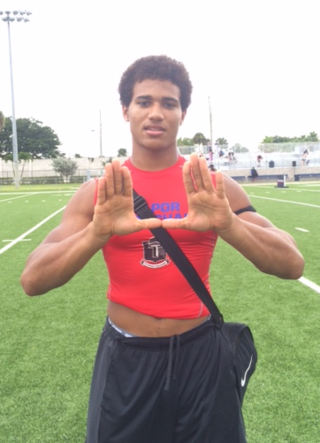 I got to catch up with four-star UM running back commit Travis Homer at the Nike Football Opening Team Games hosted by his high school, West Palm Beach Oxbridge Academy.

He talked about what led him to commit to the Hurricanes.

"A big thing was that it's close to home, so I'll be able to see my family," said Homer, who also lists UM's business school as a priority in choosing the school.

Homer likes what he's seen out of Hurricanes coach Al Golden in the recruiting process.

"I really like his character," Homer says. "I can tell he's a really down to earth guy. He enjoys being around the kids. He's just a good man overall."

Homer is one of three running backs in Miami's 2016 recruiting class along with Amir Rasul of Coral Gables and Zack Moss of Hallandale. He doesn't mind a crowded backfield depth chart and adds that UM's academics are too good to turn down.

"I think the class coming in is going to be a great bunch of kids, and we're just going to be able to go out there and show what our class has to offer," Homer says. "We're going to have a competitive environment out there."

Homer committed at the 7-on-7 Adidas South Florida Shootout that UM hosted on campus.

"It was a great opportunity to have everyone go out there and show their skills in a competitive environment," he says. "That was great how they set it up."

His school also had a tremendous setup, hosting four 7-on-7 games at once on Saturday in a tournament Carol City ultimately won.

"I think it's great exposure for our school," Homer says. "Everyone's starting to get to know us because we're such a new school."