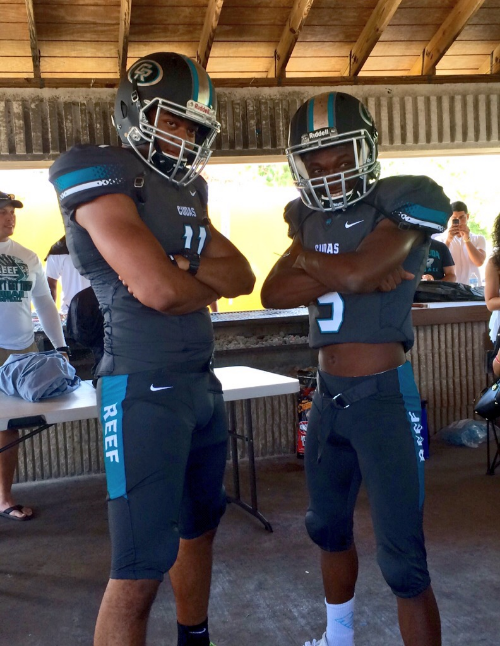 It's the final piece to a fresh start for Coral Reef football this offseason.

With a new coaching staff coming in that's trying to change the culture, the Barracudas revealed their new "black cloud" uniforms to players, cheerleaders and parents at a team picnic at Larry and Penny Thompson Park on Sunday.

The coaches couldn't do it without a little fun, though.

First, they set up a draped upper-body male mannequin on a table as coach Javi Valdes gave a speech. When it was time to lift the drape, underneath it was a plain, bland black jersey with silver numbers -- much to the dismay of the players expecting a bit more.

With parents slow clapping and mixed reactions from the players, a pair of Coral Reef alumni in Myles Campbell and Vanycksha Toussaint busted in wearing the actual uniforms. The jersey on the manikin turned out to be the practice jersey.

"I knew I had them," Valdes said. "We needed to put a stamp on what Coral Reef Football was going to look like. That's the look we're going to have for the next few years, and that's the look we want to continue having throughout my tenure here."

The Nike anthracite -- or smoke grey -- uniforms (pictured above) will have white numbers, "Cudas" in white over the number on the front, a teal stripe down the pant leg that reads "Reef" in white, and teal and white fading stripes on the sleeves. The helmets are the same color with a teal and silver stripe through the middle and the CR logo on the sides.

Coral Reef, which will alternate with a set of white uniforms depending on if the team is home or away, now joins Booker T. Washington and Miami Central as teams to sport the anthracite jerseys.

Players were relieved to learn that all the buildup for the uniform unveiling wasn't to culminate in the team wearing practice jerseys for their games. 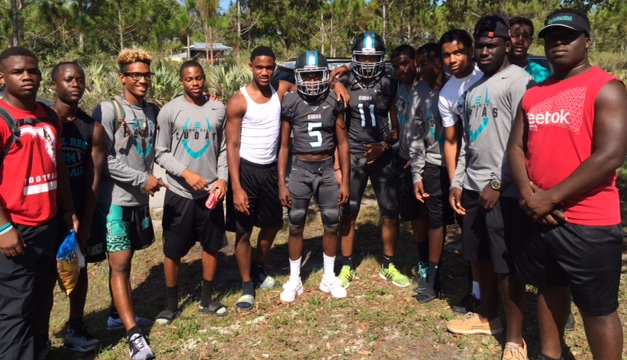 Photos and video by David Furones//FOR THE MIAMI HERALD