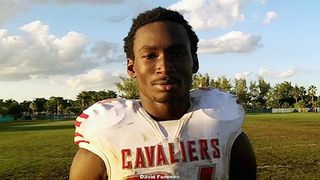 So why did four-star 2016 running back Amir Rasul recently flip his commitment from UM to FSU?

“What made me flip was pretty much I was looking at the future,” Rasul told the Miami Herald. “UM really didn’t have a good season [last] year, Golden will probably be gone and they’ll be looking for a new head coach. I didn’t want to be in that situation going into my freshman year.

“Ultimately, I think UM is a good school. It’s an awesome school, but at the moment I think FSU’s a better school for me.”

Rasul also said he was promised by FSU it would only take one running back per class over the next few years, so waiting to see if Miami did indeed have a rough season could have resulted in another back taking his spot.

“Florida State really wants me now, and if I make this decision now, I’ll probably have a much better future than being committed to UM,” Rasul says. “It’s a hard commit. I’m not trying to change right now.”

Rasul adds that he still looks at South Carolina, Georgia and Tennessee but is unlikely to change his mind at this point.

Being in such close proximity geographically to UM’s campus, Rasul says he’s had to take some criticism from hometown fans as of late.

“I’ve gotten a couple of choice words from some people in the area, but that’s OK,” he says. “If they don’t hate you, then you’re not doing something right.”

Rasul also looks at the way Dalvin Cook (formerly of Miami Central) scored the game-winning touchdown against the Hurricanes as a freshman last season and could see himself having similar success against the hometown team.

“That’s amazing – to do that and in addition be at home,” he says. “Going out the next day and knowing you did that against your hometown – that’s going to be spectacular.”

What can we expect out of Rasul in his senior season after breaking out running the ball as a junior?

He says improving his versatility. Rasul will be on returns and be more active in the passing game. He essentially wants to do all the things critics are saying he can’t do.

“You’re always going to have some doubters, people saying you can’t do this, you can’t do that,” Rasul says. “That’s OK. If I wasn’t doing great things, people wouldn’t be talking about it at all.”

Rasul is an exceptional student on top of being a top-of-the-line football recruit.

His junior year he bumped his grade point average from a 2.8 to a 3.4 and took a pair of AP courses – statistics and economics. He plans on taking an introductory calculus course and finding a challenging science class his senior year.

He had thoughts of being an early enrollee, but since he runs track, he will make sure to do that the spring semester of his senior year before getting right to college next summer.