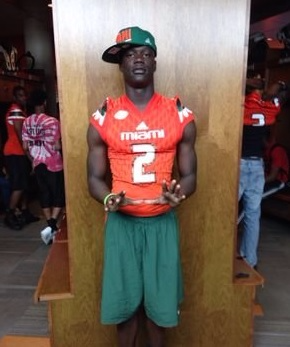 Since putting his skills on display at the South Florida Express tryouts in January, Coral Gables 2018 defensive back Gilbert Frierson has seen his recruitment erupt with major programs from across the country offering him scholarships.

On Saturday at UM's Junior Day, Frierson got the one he was apparently looking for the whole time as it turned out to be the offer he would commit to on Tuesday -- the Miami Hurricanes.

"I was truly blessed to receive an offer from my hometown team," said Frierson, who is the cousin of another Coral Gables Cavalier turned Miami Hurricane in Frank Gore. "It felt like home.

"On Junior Day when I was out there, [defensive coordinator] Manny Diaz told me [I had an offer]. It was a great feeling."

Although early for the sophomore that measures up at 6-1 and 170 pounds, Frierson adds that "so far" he is certain UM is the school he'll sign with in nearly two years.

After discussing it with my family, I am committing to the University of Miami 🙌🏈 #Canegang #Storm18 #Gocanes pic.twitter.com/x54uQuToTa

In the past month, Frierson has received other offers from Alabama, Georgia, USC, LSU and Oklahoma among his 10 in total.

"The attention and all of the offers from all over the country I think is a tribute to the caliber of player he's going to be and really that he is right now" Pollard says. "I'm excited that I've got him for two more seasons."

Mark Richt has been able to recruit Coral Gables in the past with wide receiver Shaquery Wilson currently a Georgia Bulldog.

On top of being Gore's cousin, Frierson's brother is senior Gables linebacker Shakur Cooper, who signed with FIU.

"He's the youngest of a lot of talented guys to play football," Pollard said. "His football knowledge is through the ceiling."

Frierson is now one of five prospects committed in UM's 2018 recruiting class -- four of which are fellow defensive backs.