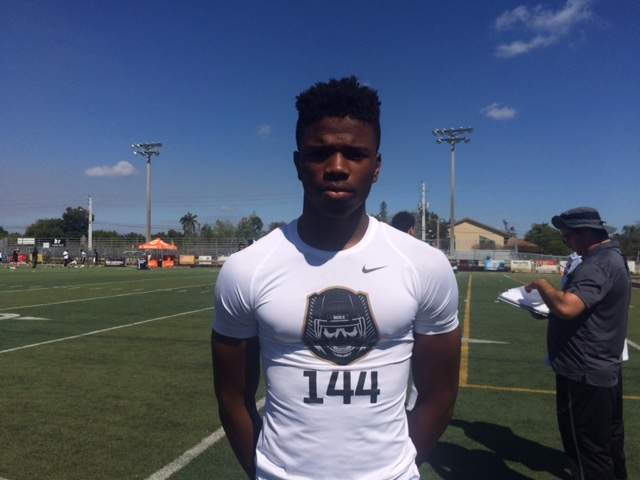 Al Blades Jr., the highly-sought 2018 cornerback who transferred this offseason from University School to St. Thomas Aquinas, went in depth with the Miami Herald on the move.

"My development," Blades (6-0, 170 pounds) says. "I basically just want to get better and be ready for college.

"[Aquinas] pushes you as a student, which is great so when you go into college you're not going into the deep end. It also pushes you as a player because you're surrounded by people just like you. If you have a man next to you on the same level as you, that just makes you want to work even harder."

A prime example would be five-star senior wide receiver Trevon Grimes, whom he'll now get a chance to go up against on a consistent basis in practice.

"That's really a blessing to go up against someone like that every day," Blades says. "If you can go against the No. 1 player in the nation, you should fear no man -- no matter what. That just helps you with your confidence going into games."

In the Rivals Camp, Blades says Grimes beat him one-on-one quite a bit, but he learned from the experience.

Recruiting-wise, Blades says that since decommitting from UM, he doesn't have any top schools.

He does say Florida State, UCLA and UM are recruiting him a little harder than other schools -- the Bruins from which he is still awaiting an offer. He adds that he likes the Hurricanes combination of head coach Mark Richt and cornerbacks coach Mike Rumph.

He has also received recent offers from Georgia and Mississippi State.

Blades went back to the day he became the second player invited to the 2018 Under Armour All-America game, receiving the invitation in person from Deion Sanders.

"I was on my A-game that day," he recalled. "I played really well that day at the Deion camp and he saw the potential in me and we just got together."

Blades recently debuted his recruit diary. If you missed that, make sure you check it out.