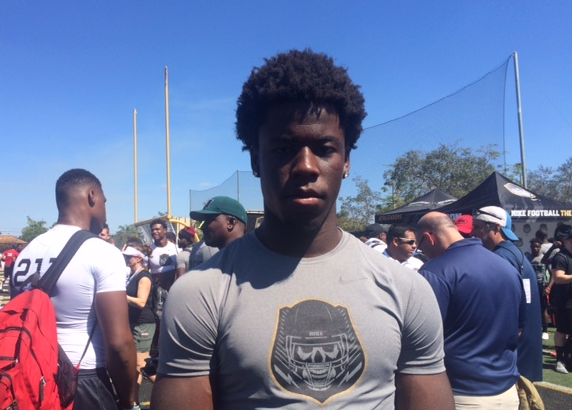 Deerfield Beach will once again have one of the most formidable wide receiver tandems in South Florida with four-star Under-Armour All-American Jerry Jeudy and three-star Lavarus Tigner.

Jeudy (6-1, 180 pounds) told the Miami Herald at The Opening Miami Regional on Sunday (where he qualified for The Opening in Oregon) "all my top is equal."

But Bud Elliott of SB Nation and Peter Ariz of CanesInsight have reported that it's Alabama and Miami at the top for Jeudy, who also noted to Zach Abolverdi of SEC Country that he doesn't have a leader (when previously listing the Crimson Tide as his favorite) and "all of the schools are equal right now."

Couple other notes I didn't get time to tweet out.

Alabama then Miami for Jerry Jeudy

FSU then LSU for Daniel Wright.

Alabama remains a big factor, but hearing that Miami is in a very positive spot with elite 2017 WR Jerry Jeudy. Must get from SoFla #Canes

While Jeudy is giving off some mixed signals, one thing that's clear is that UM has boosted itself immensely in recruiting him since the new coaching staff has taken over.

"They have a nice coaching staff," Jeudy said of the Canes. "They moved up a lot. It was just cool [taking an unofficial visit last week]. I like the way the coaches were talking to me. We were just going over what I'd be doing in their offense."

The Hurricanes stand in a much better position with Jeudy now than they did in December when he tweeted out this top 10 that made no mention of them.

Jeudy feels his speed and ability to get open is what makes him elite. He says his two favorite things to do as a receiver are either to take a screen and go all the way with it or blow the top off a defense with a deep route.

"Florida I just feel like is another home. Academic-wise, I like both schools, but I just feel more comfortable at Florida," Tigner says. "If I had [to go with] any other option, I'd go with Auburn."

Last season Tigner wasn't able to be as impactful as he wanted to be playing behind Jeudy and Riley Ridley, now at Georgia. He's excited about what he can do either opposite of Jeudy or alongside him.

"This year is my year," Tigner says. "Two great receivers on the same side of the ball, nobody can [handle] that."

Tigner is a player with the ideal confidence and attitude for a receiver that is bound for success.

He was impressive when seen at the South Florida Express tryouts in late January, winning virtually every one-on-one matchup.