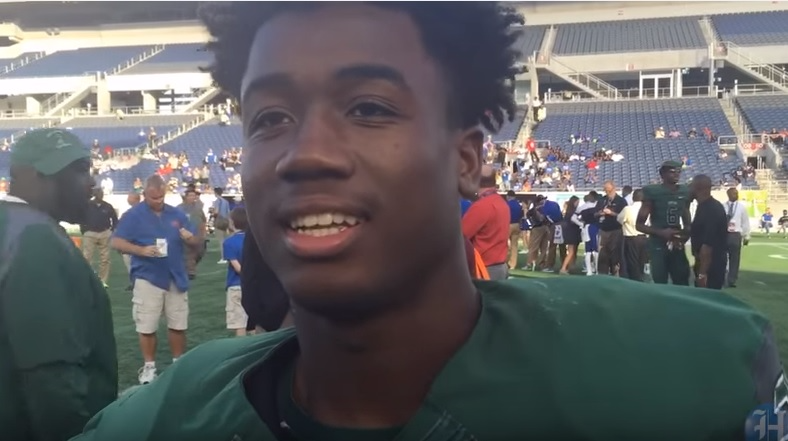 One thing star 2019 Miami Central running back James Cook always points to when talking about Florida State is that the Seminoles feel like family to him.

The figurative notion is accurate in a quite literal sense considering his older brother, Dalvin Cook, is at FSU and one of the elite running backs in the nation.

Although he still has three more high school years between now and any kind of enrollment, James decided to announce he would be following Dalvin's footsteps to FSU with a tweet Friday morning that had -- guess who -- Dalvin's picture in it.

Blessed to say I have committed to Florida State ❗️#NoleNation 🍢 pic.twitter.com/PDYamuQnKo

"When I went up, they showed me love. That gives them an edge," James Cook (5-11, 182 pounds) told the Miami Herald on Sunday before announcing any commitment. "They treat me like I'm their family. They show everybody the same amount of love."

Cook first started receiving college scholarship offers before he played a down of high school football in the spring of his eighth grade year.

"It feels great, but you can't just let that go to your head because it'll all be gone in a matter of time if you don't keep working," Cook says. "I approach it like keep working hard and I'm going to keep grinding."

On the gridiron, Cook proved his worth with the early scholarship offers. He spearheaded the Rockets rushing attack in the Class 6A state championship victory with 178 yards and three touchdowns.

Cook would become the third Central Rocket in recent memory to head to Florida State with Devonta Freeman, now with the Atlanta Falcons, preceding the Cook brothers in this pipeline that has developed.

At The Opening Miami Regionals on Sunday, where Cook won running back MVP, he said he had UM, Ohio State and Alabama alongside the Seminoles in his top.