Marco Wilson a more complete player since recovering from ACL 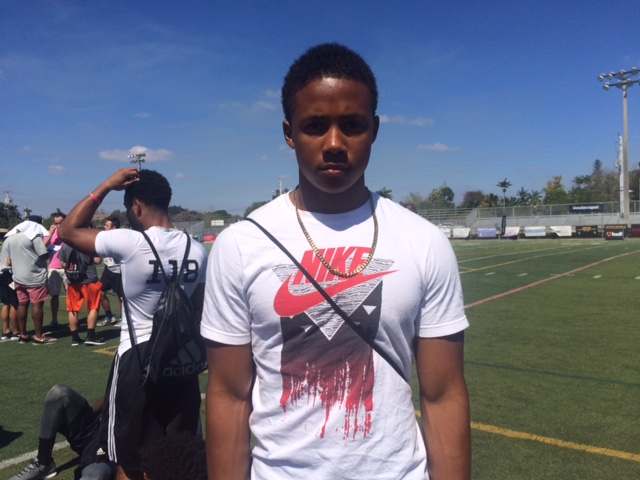 Now saying he is 100-percent complete in his recovery, the limits the injury put on his legs helped him make strides in other areas.

"I gained a lot of upper-body strength. Also, mentally, I paid attention to more things throughout the game. Watching my teammates play, I learned how offenses line up, how to watch receivers," says Wilson, who is now 5-11, 180 pounds.

"I think everything happens for a reason, so it just makes me more hungry because I really miss the game of football. It makes me play harder."

Wilson listed Ohio State, UM, UF, Tennessee and Oklahoma as schools he is highest on at Nike's The Opening Regionals on Sunday at his high school, an event he didn't participate in but was present to watch.

If he chooses the Hurricanes, his position coach in Coral Gables would be his former high school coach in Mike Rumph.

"It helps a little bit because I'm comfortable with him. I know how much of a great coach he is. I know what he can do on and off the field for a player," Wilson said. "I think he'll develop those guys that he's coaching."

What did Rumph teach Wilson during his time at American Heritage?

"He just helped me with basic technique things. When I came in here as a young guy, I didn't really know that much -- although I also got coaching from my dad (former Miami Hurricane Chad Wilson) -- but he would help me with small things that would make me perform better on the field," Wilson added. "He's always going to be looking out for you and making sure you're doing the right things in school and not just on the field."

While Wilson did not participate in the Miami Regionals of The Opening, he says he will instead opt for the one on May 1 in New Jersey.

"I hope I get invited to The Opening (in Oregon). I heard it's a great experience. My brother (current UF defensive back Quincy Wilson) went there. He told me how good it is," Wilson said. "And I know I'm the best corner in 2017. That's how I look at it."

Marco Wilson was quoted in a 247 Sports article as saying that Miami and Florida -- the two programs he has family ties with -- are recruiting him the hardest.

"I'm not going to anywhere just because of my dad or my brother," Wilson said, however. "I want to play early. I want to make sure I start my career on the right track to get to the next level. Also, I don't want to come in to a college and leave as the same player. I want to make sure that I learn new things and become a better player."

As far as offers he doesn't have that he hopes to get at some point, he goes cross country with USC and UCLA. Distance is not a factor for him.

Before Wilson sat out his junior season, he was last seen making insane highlight catches in practice (like this backflip catch).

"I could still do all that," Wilson says. "I don't know what I'd do without doing that because I'm very athletic and I like to show it."

He says he is yet to come up with any new tricks but will be back at it.