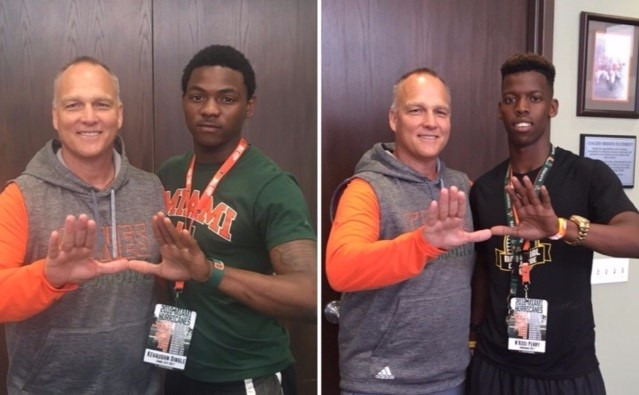 While the UM men's basketball team was notching its second NCAA Tournament victory on Saturday afternoon to become the first team into the Sweet 16, on the Miami campus one could say the football team hit both shots of a clutch one-and-one with a pair of commitments.

They are two that could be seen connecting on a lot of plays in the future. Carol City wide receiver Kevaughn Dingle and Ocala Vanguard quarterback N'Kosi Perry, both rated as high as four stars depending on the service, decided to commit to coach Mark Richt and the Hurricanes after viewing practice Saturday morning.

Perry commits to the Canes for the second time after decommitting in February from his original pledge. Dingle has been known to be high on the Hurricanes for some time now. Dingle and Perry were two of many invited recruits on campus on Saturday.

First it was Dingle announcing his news.

Within an hour, Perry let it be known that he was back on board, proclaiming that he was now committed "for good" in his tweet.

Aside from the desire to make an impact for his hometown team, Dingle wanted to go where other recent Carol City Chiefs like Allen Hurns and Trayone Gray went for college.

"I chose Miami because I feel like I can be a big impact," Dingle said. "I just want to keep the legacy going from Carol City to Miami."

Perry has ideal height to see over the line at 6-3 1/2, according to his 247 Sports page, which also ranks him as the ninth-best dual-threat quarterback in the nation.

Ironically enough, while being a dual threat, Perry said it's the pro-style aspects of Richt's offense that drew him in an interview with CaneSport.

"I was talking to him about the style of offense. He said good things about it," Perry told CaneSport. "He told me that if I want to go play in the NFL that I am best off playing in a system like what he runs, that that is a system similar to the NFL style."