Miami Norland junior offensive tackle Kadeem Telfort announced on Tuesday that he has decommitted from the Miami Hurricanes and is now committed to the Florida Gators.

The 6-6, 310-pound three-star prospect in the class of 2017 made the two announcements within minutes of each other on Twitter.

I've talked it over with my parents and we came to a decision that I will decommit from The University Of Miami.

I am extremely happy to announce that I will be committing to The University Of Flordia 🔶🐊🔷 #GatorNation #Gators pic.twitter.com/DLs10rPVMl

The Gators now have three commitments in their 2017 class -- all from Miami-Dade or Broward County -- in Telfort, Allen and Deerfield Beach wide receiver Lavarus Tigner.

UM's 2017 class bodes well despite the loss of Telfort as its seven commitments still have the Canes second only to Ohio State in the 247 Sports team rankings.

All in the family: Michael Irvin II commits to Miami Hurricanes

St. Thomas Aquinas senior wide receiver/tight end Michael Irvin II announced on Monday that he was committing to the Miami Hurricanes, the alma mater of his father, Hall of Fame wide receiver Michael Irvin, who played at UM from 1985-1987.

The 6-3, 220-pound Irvin II took to Twitter to make the big announcement.

"Although Michael is blazing his own trail, he's excited about attending his father's high school and college alma mater," St. Thomas Aquinas coach Roger Harriott told the Miami Herald. "Miami was his first offer and he's considered himself a Cane for as long as he could remember.

"STA Raider Nation loves the Irvin family and we're elated that Michael II has an opportunity to pursue his childhood dreams."

In 2012, Irvin was quoted in an article by Brian Perroni of 247Sports, jokingly saying his son could not play for any other school.

“My exact words to Mike were this – ‘There are some choices God gives us and some He doesn’t.’ He can’t choose his mom, his dad, his brothers or sisters or what school he goes to. Everything else, he can choose. He WILL go to the University of Miami,” the article notes Irvin Sr. said laughing.

The dream scenario for the UM legend finally came to fruition as Irvin II, a three-star prospect in the 247 Sports Composite Rankings, chose the Canes over other notable offers from Georgia, Michigan and N.C. State.

It won't be the first time Irvin II follows in his father's footsteps as this April he decided to transfer from Plano (Texas) Prestonwood High to join Irvin's high school alma mater of St. Thomas Aquinas.

Irvin Sr. collected 2,423 yards and 26 touchdowns on 143 receptions in his three years with the Canes before a stellar professional career with the Dallas Cowboys.

Here are Irvin II's highlights from last season in Texas.

The 6-2 prospect in the class of 2018 is one of 800 athletes selected nationally to participate in the event led by current and former NFL players and coaches.

Top Gun is the culmination of Football University’s 24-camp nationwide camp season gathering elite performers from across the nation and allowing them to compete and display their abilities together on one stage.

A little more than two weeks after his commitment to UM wasn't accepted by the Hurricanes due to a miscommunication among the staff about whether he actually had a Miami offer, junior Somerset wide receiver Daewood Davis has decided to commit to Syracuse.

Like to say I'm officially committed to Syracuse #GoOrange🏈🏈

"I feel Syracuse was right for me because I feel that we can can make history with the Orange," Davis said in a message to the Miami Herald.

The 6-2 class of 2017 prospect with reported 4.3-second speed in the 40-yard dash initially announced a commitment to UM on June 12 but then found his commitment was not accepted. He said he was offered a month earlier by defensive coordinator Mark D'Onofrio, but the rest of coaching staff was unaware of the offer he thought he had on the table.

At that point Davis said UM was telling him it would eventually accept his commitment, and Davis was still listing UM as his leader but opted to commit to Syracuse on Monday.

Sights from The Opening Team Games

They had 16 South Florida 7-on-7 teams in total and four different fields running at a time.

In the end, Carol City cruised to a 44-23 victory in the championship game against Flanagan. This picture below was taken during the celebration over one of the Chiefs' interceptions in the contest. 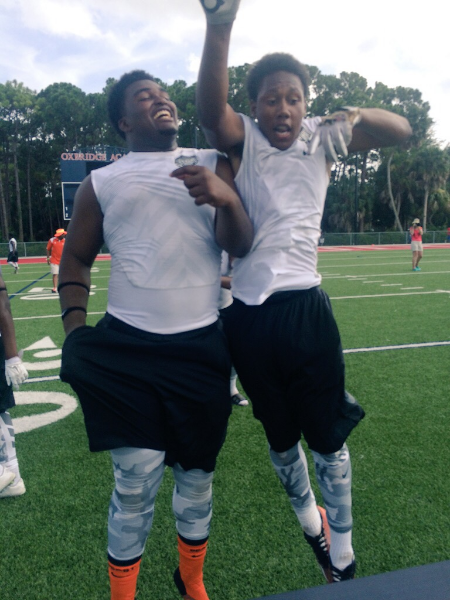 Quarterback Stephen "Buckshot" Calvert was phenomenal in finding his receivers consistently. Here's his one-on-one interview with the Miami Herald.

While Carol City won the 7-on-7 team tournament, Flanagan's runner-up finish plus victories in the individual skills competition at quarterback, wide receiver and 40-yard challenges were enough to put the Falcons over the top in overall points.

One of the players on the host team is four-star running back and UM commit Travis Homer, who took a second to show his allegiance to the cameras. 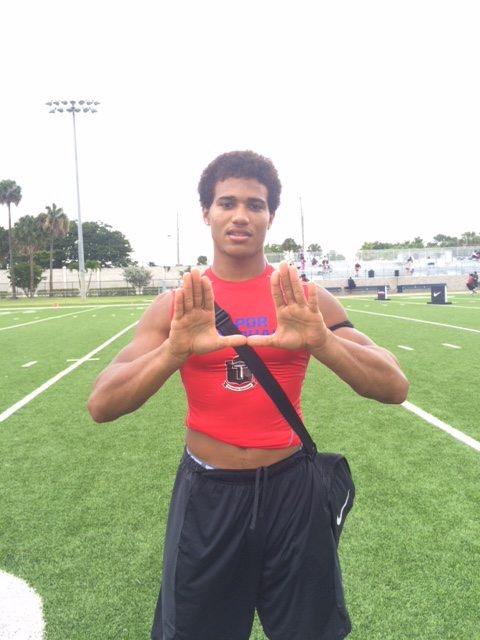 A UM decommit not too long ago who has since jumped on board with the Michigan Wolverines in what's appearing to develop into a little bit of a pipeline between Flanagan and Michigan, Devin Gil was held out due to an arm injury but took a second to show love to Michigan throwing up the M. 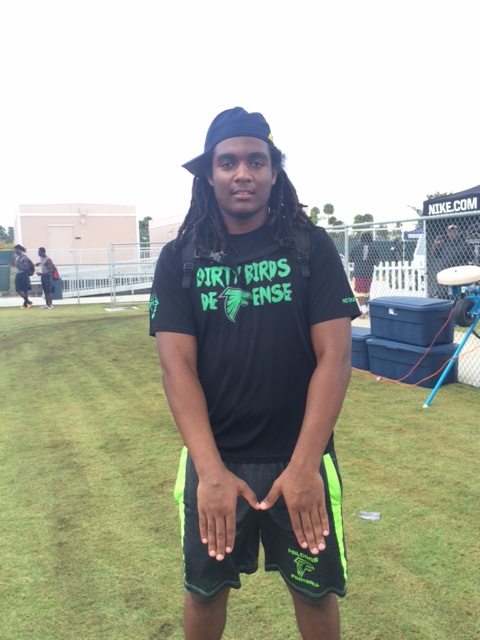 You'll want to stay tuned to the blog as interviews with both Homer and Gil are coming, as well as updates on Darnell Salomon, Joseph Jackson and Clevan Thomas.

Former Miami Central and Florida State running back Devonta Freeman, now with the Atlanta Falcons, will hold his first youth football camp in a free event for all kids ages 4-15 at Charles Hadley Park on Sunday.

Details and information are listed in the flyer below. 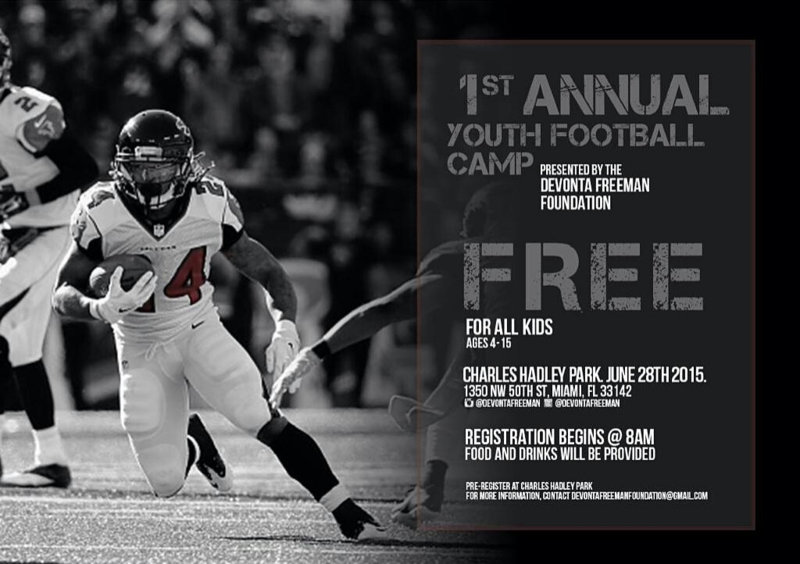 Flanagan ranked No. 9 in preseason poll, Gil commits to Michigan 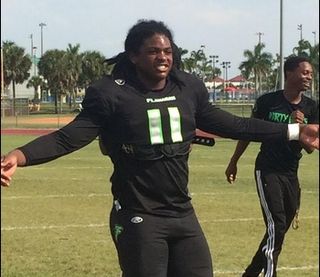 The stellar national ranking follows a 2014 season where the Falcons won their first district title in program history and advanced the furthest they have in the postseason, reaching state semifinals.

"Look what hard work can do when you put it together and it pays off," says coach Devin Bush, entering his third season at the helm for Flanagan. "Personally, we weren't trying be ranked in the country. Our goal was to try to win a national title, try to win the district and try to get to states.

"It's good for a pat on the back because we worked so hard. We'll enjoy it today, but tomorrow, that's over with."

The ranking even put Flanagan ahead of perennial power St. Thomas Aquinas, which placed 16th on the list. The top five will be released in the coming days.

More big news (or B1G news) came from Flanagan Friday as linebacker/safety Devin Gil, a former Miami Hurricanes commit, committed to the Wolverines. This comes two days after teammate Josh Metellus committed to Michigan and within the week of the commitment of Cooper City's Rashad Weaver.

Ill be taking my talents to the big house by committing to the University Of Michigan 〽️🔵 #GoBlue pic.twitter.com/ejpJdXeUCr

Bush believes defensive coordinator D.J. Durkin had a lot to do with the commitments of his Falcons.

The commitments come less than a week after Bush, his son in four-star linebacker Devin Bush Jr., Gil and Metellus were all in Ann Arbor. Coach Jim Harbaugh also came down to South Florida the previous weekend to assist Bush in hosting a camp.

The loss in the 2016 class continues a trend of missing out on interior defensive linemen in recruiting for Miami in recent years.

The Miami Hurricanes added a commitment from 2017 tight end Tre McKitty on Tuesday.

The big-bodied 6-4, 225-pound prospect from Tampa Catholic chose Miami over other early offers from several SEC schools, including Florida, Auburn, Tennessee and Mississippi State, according to 247 Sports.

Thank you to all the coaches But after talking with my family Im blessed to be able to say I have committed to TheU🙌🏾 pic.twitter.com/yJ6nZcDOBx

McKitty becomes the Canes' seventh commitment in the class of 2017 and first tight end, a position that is also not currently represented in the 2016 class but sees plenty of depth on Miami's current roster with junior Standish Dobard, sophomore Chris Herndon, redshirt freshmen Jerome Washington and David Njoku and junior Jake O'Donnell.

McKitty is impressive on film, making good use of his large frame on several catches.

Miami Jackson linebacker Shemar Smith, the reigning Miami Herald Defensive Player of the Year, is going into his senior season with a chip on his shoulder to prove the recruiting services wrong on his two-star rating.

In this exclusive interview with the Miami Herald, Smith, who lists a Texas offer among many others, talks recruiting and a variety of other topics at the Miami Dolphins 7-on-7 last Saturday.

The Miami Hurricanes are looking to return to DB U status in a few years.

Jobe is a long, athletic 6-1 and joins Thomas Burns of Miami Northwestern, Al Blades Jr. of University School and Jalen Patterson of Citra North Marion as other defensive backs in Miami's 2018 class, which also has a commitment from Booker T. Washington linebacker Billy Joseph.

"They're getting somebody who is almost identical to Deon Bush," Columbus coach Chris Merritt said. "Very similar build, long body, athletic -- almost like a carbon copy. Just like Deon, he's going to have the ability to play corner or safety, but he's got a lot of development [ahead of him]. In our terms even, he's still a baby."

Jobe played sparingly on defense and plenty on special teams as a freshman, including a kick return for a touchdown at Highlands High in Kentucky.

"For a freshman to break the lineup like he did was pretty special," Merritt said. "We anticipate him being an every-down player for us this year coming up."

Jobe had one other offer early in his recruitment from Cincinnati. He will get plenty of other offers before he signs three years from now, but Merritt sees him sticking with the Canes all the way through.

"The school everybody wants an offer from in Dade County is University of Miami," Merritt says. "That's where you set the bar."

Check out Jobe's highlights below for a look at the Deon Bush resemblance.