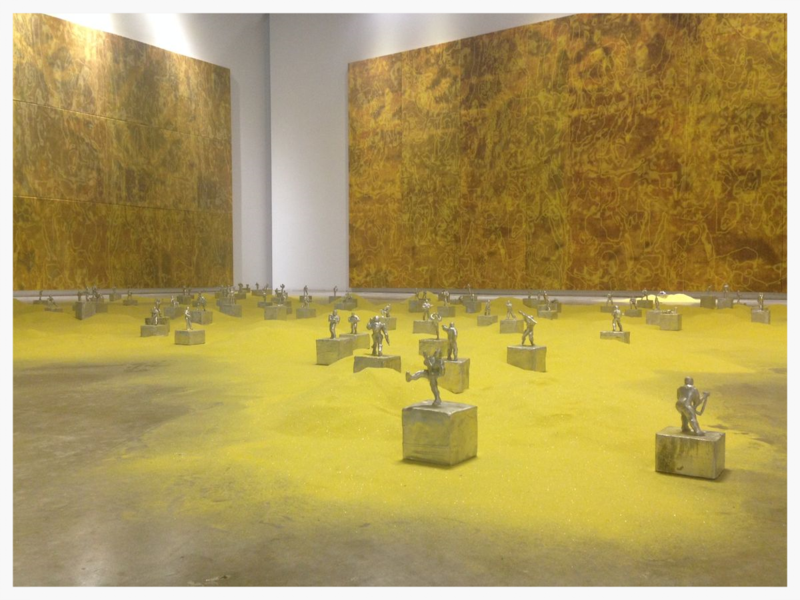 Eugene Lemay's "Nights in Beirut" is part of the Mana Monumental show at Mana Miami​.

After multiple changes in plan, Mana Contemporary, the giant hybrid artist space and community in New Jersey, opened their Miami space with a literally Monumental show of giant-sized artworks in the colossal former warehouse they own in the heart of Wynwood.


Even the giant paintings and sculptures on view looked small in the sweeping space, which is exhilarating in itself. Heavy on 80’s generation artists such as Julian Schnabel, Francesco Clemente, and David Salle (former partner to choreographer Karole Armitage, who has a dance studio at Mana in New Jersey), Mana Monumental also included an installation by Jose Bedia, gorgeously executed photo realist paintings by Yigal Ozeri, and a re-imagining of Picasso’s Guernica Unguernica by Ray Smith.

Mana executive director Eugene Lemay’s Nights in Beirut, with a small army of miniature soldiers in yellow sand advancing on three large paintings covered with hieroglyphic Arabic and Hebrew writing on a yellow field, evokes his experience in the Israeli army during the 1982 war with Lebanon.

Mana Miami’s plans for their six blocks of Wynwood real estate are still in flux. But this exhibit, which is up till 5 p.m. Sunday, is well worth catching. At 318 NW 23rd Street, Wynwood.

Posted by Miami Herald at 04:00 PM in Satellite Fairs | Permalink