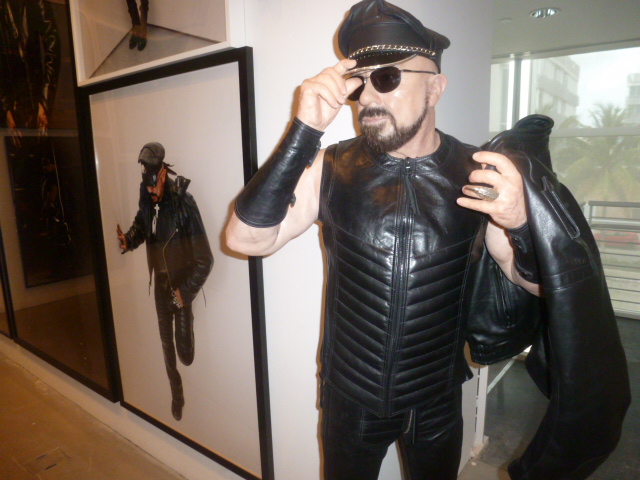 If you've gaped at an eye-popping facade of a luxury boutique by Fendi or Gucci, chances are it was designed by Peter Marino, architect, artist and himself a walking work of art. At the Bass Museum Tuesday, Marino unveiled an art exhibition like no other, combining works he commissioned specifically for the Bass show, works he has created himself and works he has collected by other artists, including early mentor Andy Warhol, Richard Prince and Robert Mapplethorpe. It's the first time works from his personal collection have been shown outside his own offices, where they are used to inspire creativity in staff, he said. Jerome Sans curated the exhibit.

(Those with long memories will remember that the National Endowment of Arts came under fire years ago for its support of Mapplethorpe, which made it ironic that Marino was speaking just minutes after NEA Chair Jane Chu concluded remarks on the mainland side of the Bay.)

The Bass show is named "Peter Marino: One Way," because, he said, that's how he lives, viewing all situations in black or white, without grays. Marino himself is a study in contrasts -- sweet, friendly and little nervous, in dramatic contrast to his biker leather clothes and hat sporting skulls. (The clothes he makes himself; the skulls are because, eventually we all end up that way.)

Like Miami itself, Marino's exhibition combines fashion, celebrity, architecture, art, with a decidely commercial and overtly sexual edge. Damien Hirst's "Dark Architect" cabinet of black gas masks was created as a portrait of Marino; a series of knives stick from the wall spelling the word "Paradise." The maze leads through a bright room showcasing Marino's architectural projects, and then wends back to a space covered in black eel that showcases works by Mapplethorpe and a series of Renaissance busts. The final space refers to an opening series of Orpheus images from the Jean Cocteau film, reinterpreted by Marino in a videoed opera in the final space.

Why at the Bass, and why now? Marino answered his own question. He was intrigued by the museum's own collection, which mixes contemporary with historic art. And, he said, because Miami has become an architecture mecca.