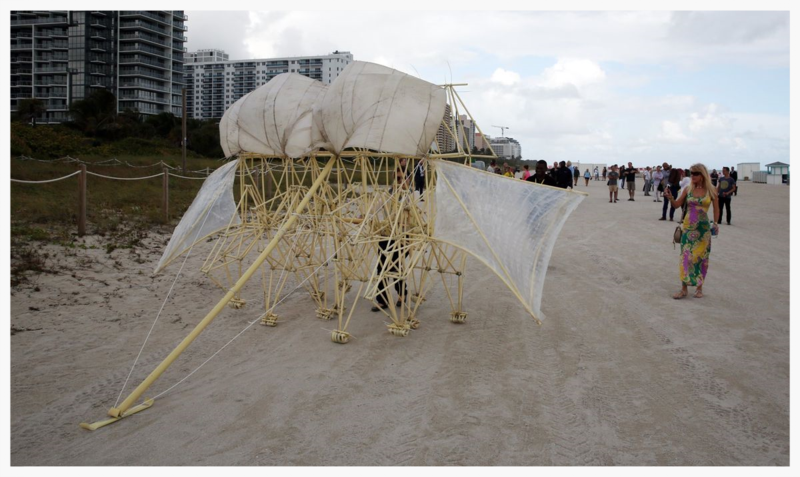 Theo Jansen calls them “strandbeests,” but when his large mechanical sculptures put in an appearance at Art Basel on Thursday, it was more a case of beauty and the beach.

The Dutch Da Vinci hails from Holland, where a beach has been named in his honor because that’s where his beasts first came to life, so to speak. So, it was perfectly fitting that Miami Beach would host their coming out party in America.

(Click Here to Watch Strandbeests Go For A Stroll)

At first glance, the sculptures — which look like exoskeletons made of PCV pipe and twist ties — may appear ungainly when stationary. However, when the wind catches them they reveal a hidden grace in their determined forward march along the sugar sands behind the W Hotel on Miami Beach.

The largest of the strandbeests – which means "beach animals" — resembles a dinosaur-sized doodlebug. While not strictly participatory art, crowds naturally tend to migrate toward the beasts. At one point on Thursday, even a baby crawled toward them as they loped down the beach. Although Jansen has been making his kinetic sculptures for nearly a quarter-century, Art Basel Miami Beach marks the first time they will be on display in the United States.

Swiss watchmaker Audemars Piguet, in partnership with the Peabody Essex Museum, are hosting the exhibit Strandbeest: The Dream Machines of Theo Jansen. The exhibition is slated to continue onto New York, Chicago, San Francisco and Salem, Massachusetts, home to the Peabody museum.

While they are in town, the general public is invited to watch twice-daily beachside presentations as the sculptures half-sail, half-walk in a piston-like fashion across a stretch of beach behind Collins Avenue between 21st and 22nd Streets. Daily performances are slated to run through Dec. 7 at 10:30 a.m. and 4:30 p.m.

The evolution of Jansen’s beach beasts constantly surprises. Often they astound the creator.

“When the animal is finished, usually it does not function the way I want it to, but it became a beautiful animal,” Jansen told The Miami Herald. “I am surprised myself about that. I didn’t work on beauty. I just worked on function.”

With all humility, Jansen says, he uses the same approach found in nature.

“I don’t think there is a God who tried to make beautiful animals for us,” he says, explaining that the beauty is an offshoot of the animal’s perfect functionality, evolving over millions of years.

“I use the same methods as the real creator,” he says. “I just create mutants.”

Jansen maintains that beauty is derived from the materials — light yellow PVC tubes — and what he calls the DNA code for the sculptures. That code actually includes 13 precise measurements. Each tube used on every sculpture is cut specifically to the length of one of those 13 measurements, he says.

He discovered the code in 1991 after running an algorithm on his computer. He posted the measurements on his website, www.strandbeests.com, so that others interested in his work can make their own strandbeests and perhaps expand upon his work.

Originally a physicist, teacher and newspaper columnist, Jansen says he only seriously began focusing on art while in his 40s. However, he was just 33 when he played a “War of the Worlds”-type trick on the good citizens of Delft when he launched a makeshift UFO that frightened half his neighbors. He started a small panic, the way Orson Welles did when he broadcast the fictional account of Martians landing in New Jersey.

He tends to create art with a twinkle and a chuckle.

“There’s a sort of tendency in my character that I want to find a balance between reality and fiction, imagination,” he says. “So for instance, by fooling people, and people believe something — that’s really fun.”

He calls himself “The Great Pretender,” after a Platters song and in recognition of his current work.

“It’s a nice song,” he says. “And of course my work’s a bit pretentious, pretending that I’m a god. So, I think I become wiser about evolution about our existence as well. Although it is still a big mystery and miracle for me.” The solitude of the beach seems to amplify that mystery.

“Many times I’m alone there on the beach and I experience nature as a big mystery,” he says. “I don’t know why we are here and I’m very surprised that we are here. Especially that I am here. How is that possible? That I landed in this body? That I landed here in Miami? It’s crazy. I don’t understand. But I’m enjoying it very much.”

The 66-year-old artist hopes to live another 20 years so that he can create a herd of migratory strandbeests that remain in perpetual motion long after his death. The goal is to set them free on his namesake beach and let the wind dictate their path. For now, he still has to help the strandbeests because they tend to get stuck in the sand on occasion.

“I hope in the next 20 years that they can do it on their own,” he says, “And then my ashes will be on that beach and that will be the end.”

Where: The beach behind the W Hotel, at Collins Avenue, between 21st and 22nd Streets, Miami Beach