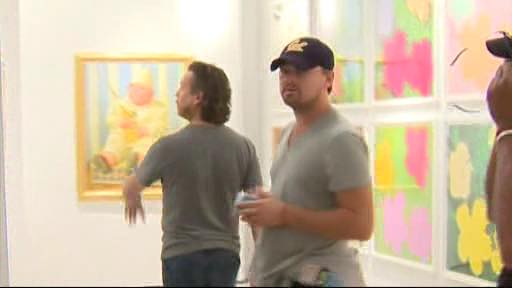 We previously reported on Leonardo DiCaprio's #ArtBasel takeover, but now that he's gone, more details are surfacing about his wild nights and big balls.

DiCaprio, who was staying at The Miami Beach EDITION, closed down Basement Bowl each night, Monday through Wednesday, starting at 3:30 each morning, to host a private party for his celeb friends and slew of what our spy witnesses can only describe as "leggy models."
On Tuesday night, Leo partied in Basement to celebrate the club's 1-year anniversary, then came back late night to take over the Bowl lanes with his crew of 40, which included:Jamie Foxx, Ellie Goulding, Miguel, Alexandra Richards, Lukas Haas and Jamie XX. A certain hotel heiress was there, too.
The following night, he returned to shut down the bowling alley again with aforementioned alluded to heiress, Miguel, Megan Fox, Meagan Good, Mario, Foxx, billionaire Brian Sheth, and the cast of Power.
As for whether or not anyone was caught making out or picking their nose, it's anybody's guess. No pictures were allowed and no one is talking. The only thing we got was, "the girls that were invited in were Amazons. I mean, you had to fit a certain requirement to get invited to the party."